Baltimore, Maryland.  Graphic novelist, Billy Tucci, was at the Baltimore Comic Convention September 27-28 introducing his new six-issue comic book series set in WWII -- Sgt Rock: The Lost Battalion.  He is resurrecting the DC Comics character Sgt Rock, placing him in the 1st Battalion, 141st Regiment of the 36th “Texas” Division.  This unit came to be known as the “Lost Battalion” since it was cut off for 6 days behind enemy lines in the forests of the Vosges mountains in eastern France.

The 278 men of the “Lost Battalion” repelled repeated German attacks as the Japanese Americans of the 442nd Regimental Combat Team fought their way up the mountain in brutal tree-to-tree combat to break through to the trapped men.  Tucci uses his storytelling skills and vivid artwork to bring the compelling story of this battle to life.  In fact, he goes beyond the battlefield story, weaving in other issues faced by the Japanese Americans, such as the incarceration of 120,000 Japanese Americans into internment camps. “In my heart,” said Tucci, “I feel that this comic book series can serve as a bridge that spans generations and brings attention to a true story of heroism, humanity and sacrifice.”

Tucci is passionate about the subject.  He said, “I want to make the story as authentic as possible.  About a year ago, I threw myself into this project, researched the battle, and interviewed 141st and 442nd veterans, visited the battlefield in the Vosges forests where I even drank from the water hole used by the Texans and Germans.  I also gained many insights from the Vosges residents, especially two young French historians, Gerome Villain and Hervé Claudon.” 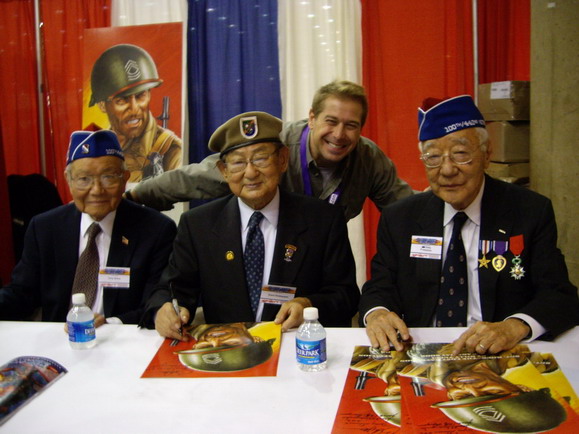 Tucci invited three Japanese American WWII veterans to join him in signing free promotional prints of his art for the throng of people who visited the DC Comics’ display.  He also moderated a panel discussion on his Sgt. Rock series in the Convention Center auditorium.  The Japanese American veterans invited to serve on the panel discussion were Yeiichi Kelly Kuwayama, 442nd combat medic, Ranger Grant Hirabayashi, a member of the famed Merrill’s Marauders, a Special Forces brigade which operated behind enemy lines in Burma, and Terry Shima, a 442nd veteran.

Tucci told the audience that this rescue is considered by the Army as one of the most fiercely fought battles in U.S. Army history.  He also talked of the unique interplay of forces: (1) the trapped soldiers of the “Lost Battalion”, who fought a much larger, well-entrenched enemy force while in the impossible situation of  dwindling supplies, hunger and freezing, wet conditions; (2) their rescue by the Japanese American soldiers of the 442nd RCT, who battled yard by yard through the heavily-mined forest often in face-to-face combat; (3) the pilots of the 405th Fighter Squadron, who negotiated critically adverse conditions to drop supplies and ammunition to the embattled “Lost Battalion”;  (4) the French citizens of the Vosges who guided the Allies through the forests and cared for wounded soldiers; and (5) Hitler’s crack troops, who had orders to annihilate the trapped Texans.

Seeing a row of medals over Kuwayama’s left chest, a member of the audience asked about them.  Kuwayama responded that he received the Purple Heart for wounds from enemy fire on October 28, 1944 in the battle for the Lost Battalion.  Kuwayama also received the Silver Star for the same action.

Three thousand Japanese Americans also served in the U.S. Army in the Pacific, interrogating Japanese prisoners and translating captured documents on the front lines.  Men like Ranger Grant Hirabayashi, who faced the Japanese in combat in the Pacific, were determined and proud to prove their loyalty to their country.

LTC Herbert Martin, USA (Ret), Vice President of JAVA, said that “Tucci’s creation appears to have promising educational as well as entertainment potential.  The exposure for the Japanese American WWII experience through this Sgt. Rock mini-series is truly awesome.”