Washington, D.C.  The Japanese American Veterans Association (JAVA), a national veterans service organization was inducted as an associate member into the Veterans Day National Committee on September 14, 2006 in a ceremony at the Department of  Veterans Affairs headquarters in Washington, D.C.  JAVA serves the interests of all veterans, National Guardsmen, Reservists, and Active Duty personnel of Asian Pacific heritage.

The Veterans Day National Committee, which is mandated by the Congress, was formed by Presidential Proclamation in 1954.  VDNC, whose Honorary Chairman is the US President, is responsible for the planning, promotion and coordination of national veterans day programs.  The Chairman of VDNC is the Secretary of Veterans Affairs and Honorary Members are the Secretary of Defense, Chairman and Ranking Member of the Senate Committee on Veterans Affairs (which includes Senator Akaka, an honorary chair of JAVA), and Chairman and Ranking Member of the House Committee on Veterans Affairs. 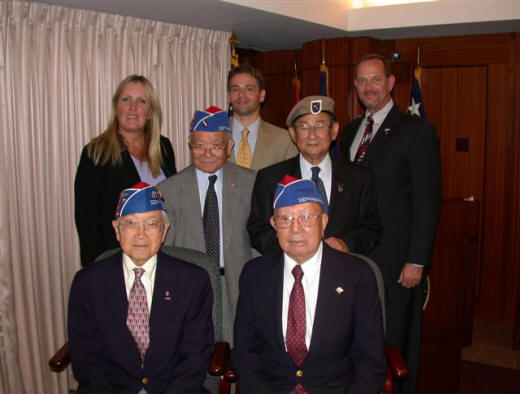 Executive Director Terry Shima represented JAVA at the induction ceremony, where he thanked the committee for this recognition.  He also conveyed President Bert Mizusawa’s appreciation and noted that Bert had met with Secretary Jim Nicholson, HCVA Chairman Steve Buyer and other key Veterans Affairs officials recently in Iraq, where Bert is on duty as a brigadier general.  Shima then introduced JAVA members who served in World War II: they were Grant Hirabayashi of  Merrill’s Marauders; Joe Ichiuji, 522nd Field Artillery Battalion of the 442nd Regimental Combat Team; and Dr. Norman Ikari, 442nd Regimental Combat Team.  Following the ceremony, Shima represented JAVA in its new status by participating in preparations for the Veterans Day program at Arlington Cemetery, wreath laying ceremony at the Tomb of the Unknowns  and the White House breakfast.

General Mizusawa said that “JAVA’s acceptance in VDNC is recognition of JAVA’s leading role in representing Asian Pacific Americans veterans at the national level.  It is an honor for JAVA to represent our great APA veterans and their honorable service in defense of our nation.”