442ND  VETERANS  VISIT BATTLE GROUNDS IN ITALY AND FRANCE.  CANNOT BELIEVE HOW THEY CLIMBED STEEP CLIFF OF MT. FOLGORITO IN 1945 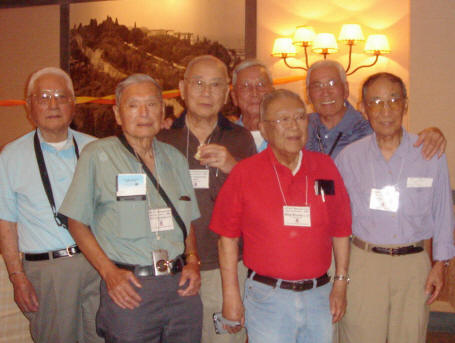 The first stop on July 5, 2006 was the cultural city of Florence, where the group paid their respects to thirteen 442nd soldiers who are interred in the American Military Cemetery there.  Then on July 10 the group arrived in the town of  Pietrasanta, where they were officially received by Vice Mayor Marco Marchi  and partigiani, anti Nazi local freedom fighters .  This area was the scene of heavy fighting and where, on April 25, 2000,  the town folks dedicated a statue of Medal of Honor recipient Sadao Munemori as a tribute to Allied soldiers who liberated the area.  Munemori was awarded the nation’s highest award for valor on April 5, 1945 when an enemy grenade landed in his  foxhole. Not having the time to throw out the grenade, Munemori, in split second, dove on the grenade which exploded, killing him instantly, but saved the lives of his two buddies.  Other acts of heroism of this sort would be recognized in June 2000 when, following a review, twenty Distinguished Service Crosses would be upgraded to  Medals of Honor.

The group then went to the town of Massa, located  five miles from Pietrasanta and famous for its high quality marble, where they were greeted by officials of the Association  Nationale Partigiani Italiani (ANPI).  From there they went to Mt. Folgorito, where, on the night of April 4, 1945 the 3rd Battalion scaled a steep cliff to position themselves at  the  top of the mountain.  Meanwhile, the 100th Battalion scaled Mt. Folgorito from the other side. The objective was to dislodge and get the enemy to retreat to where the 2nd Division was positioned to cut them down. At 5:00 AM on the morning of  April 5, the 442nd launched their daring plan which caught the Germans asleep.   In 32 minutes the “impregnable” German defense, known as the Gothic line, was breached.    The 92nd Infantry Division failed to do this in the preceding five months.

The group selected four 442nd veterans to scale the cliff.  The Italian Park Ranger transported them by jeep  to within 200 yards from the summit.  They climbed but considered the last 50 yards too steep.  They stopped, however,  Sakai and the Park Ranger made it to the top where they planted the 442nd/ANPI banner.  Kizuka, who made it to the top of   the mountain that morning in 1945, couldn’t believe what he saw … “How did we climb up there  at night with all our equipment… I wouldn’t want to climb  it in the daytime, he mused.”

On July 13 the  group proceeded to the American Military Cemetery in Epinal, France where another thirteen 442nd KIAs are interred.. Over  20 French partisans and  two young Europeans, who are 442nd  historians,  greeted them and provided details of the rescue of elements of the 141st Regiment, 36th (Texas) Division, which the press dubbed the “Lost Battalion”.  The historians are Gilles Guignard from Geneva, Switzerland, and Pieter Oosterman from Holland, both wearing WW II US Army uniforms. After a dignified  memorial service, that included the placement of a wreath and the burning of incense, the group visited the Nisei gravesites, including Tamosu Hirahara of  Honolulu, HI and Hachiro Mukai of Morgan Hill, CA.   Ed Hirahara, nephew of Tamosu, and Shinichi Mukai, brother of Hachiro, were members of the tour group.   In 1998 a Sansei US Army Colonel visited Epinal with his family.  In his discussions with the caretaker, who knew the locations of the Nisei gravesites, he was asked if many people visit the Japanese American  gravesites.  The caretaker responded “almost every day”

They then journeyed to the town of Bruyeres     , where the town folks feted the group to a gala welcome dinner.  A major highlight of the tour was the group’s involvement in the July 14th Bruyeres’ Bastille Day, the French Independence Day, celebrations .  The day started with a  stop for photos at “Rue de 442” followed by a visit to Helladraye forest to the site of the 442nd monument, constructed by the town’s people to honor their liberators, the 100th Bn and the 442nd RCT.  The group was greeted by about  400 Bruyeres town folks, the French Army Band and French partisans. An impressive program that included the placement of  many floral wreaths at the base of the 442nd monument and speeches was done with dignity and skill that indicated  the  frequency of this genuine display of appreciation to Japanese Americans who visit there individually or in groups.  Everett Wakai, who represented the American Embassy in Paris, served as the interpreter.

Following this, the group marched at the head, or the position of honor, in the annual Bastille Day  Parade that ended at “Place Stanislaus” in the City Square where civic and military dignitaries were on the reviewing stand.  Awards were presented to French citizens and medals were presented  to the 442nd veterans. This was followed by lunch with the Peace and Freedom Trail Association (PFTA) members and another parade called the “Blueberry Festival” where the group again marched in the place of honor and which included bands and floats and Hawaiian  hula dancers.

On July 15 the group visited Biffontaine, located about five miles east of Bruyeres  and where they transferred to US WW II military vehicles with drivers in US Army uniform for the three mile drive to the 36th (Texas) Division Monument in the Vosges mountain.   The group was taken to the site where the elements of  the  141st Infantry Regiment was trapped by the Nazis with orders to “annihilate  them so they don’t fight on German soil”.  After five days of the most fierce fighting, including “banzai” charges and hand to hand bayonet fighting, 211 men were saved at huge casualties sustained by the 442nd.  The US Army categorized this battle as one of the ten most fiercely fought battles in its history.  Approximately 200 residents of Biffontaine participated in an impressive ceremony with band and French dignitaries placing floral wreaths at the base of the monument.

Tour Director Sakai probably reflected the views of the 100th Bn and 442nd RCT veterans, their families and the Japanese American community when he said:  “We are grateful for the Italian and French people who, at their personal expense, erect monuments and hold programs to honor their Japanese American liberators.”  30