FOR PHOTO:    Go to www.javadc.org, scroll down to Press Releases,

picture is embedded in appropriate article.

When President Bert Mizusawa was elected President three years ago he outlined two goals: (1) to  transform JAVA from a veterans social organization  to a national organization  that embraced Japanese Americans and Asian Americans veterans, reservists and active duty personnel and (2)  to seek to obtain, individually and in concert with  other veterans organizations,  for veterans, reservists, and active duty personnel entitlements they have earned.  JAVA has since moved couple steps further, i.e. the creation on July 5, 2006 of the Asian American Veterans Association (AAVA) and the upgrade of the JAVA Newsletter.   Now approaching the end of his second two year term,  Mizusawa has largely achieved his  twin goals.

During the past six months JAVA members have been invited to the White House three  times and once to a White House sponsored function.  President Bush recognized the 442nd Regimental Combat Team on two of these events and on each  occasion shook  the hands of JAVA members.   One of these  events was a seminar to which JAVA member Bob Nakamoto, Korean War veteran and prominent Washington, D.C. businessman, was invited as a panelist.  JAVA’s relationship with the Department of Veterans Affairs has been solidified with its election to the prestigious Veterans Day National Committee, which is mandated by Congress.  JAVA is also among the veterans organizations contacted for conference calls by the Secretary of  Veterans Affairs to discuss urgent veterans matters.   During Secretary (getting)_Nicholson and Congressman Steve Buyer,  Chairman of  the House Veterans Committee, visit to Iraq during August 2006, they met Mizusawa, who is deployed there.   Mizusawa said his discussions included  JAVA and AAVA matters.

As a member of the 3.5 million member National Military Veterans Alliance, JAVA participates with them in joint action, especially with the  US Congress, to influence legislation. The potential for growth, especially  AAVA, is considerable.  As JAVA  and AAVA expand in these   areas, it needs to establish viable links with all Asian American, including Japanese American, organizations  and individuals so their views and interests are properly represented.

This article reflects on JAVA’s  communication with Japanese American and Asian American veterans individually and organizationally. The communication channels are as follows:

Grant Ichikawa, member of JAVA Executive Council, converted his personal blog to  serve JAVA purposes.  Called the “round robin”, this electronic newsletter has  become JAVA’s principal   communication  link with with nearly 2/3 of JAVA’s members to convey club news, veterans issues and information relating to veterans.  The round robin, issued twice or thrice per week depending on traffic volume, is  a real time, informal, unofficial communication  link.  Feedback from members have  been helpful, although more are solicited. This channel has become the life blood of JAVA.

A 10-12 page JAVA Newsletter is produced quarterly for circulation through the round  robin  and the postal mail.  Beginning with the July 2006 issue,  editor Kay Wakatake has  upgraded the Newsletter in terms of lay out and color photos.

The Executive Director augments Ichikawa and Wakatake’s efforts through postal mail, emails and telephone contact  with concerned members on specific issues.   In addition, some 30 press releases are issued each year for publication by  Asian American newspapers, general press, and veterans organization  newsletters to reach Asian American veterans, and to educate the general public. 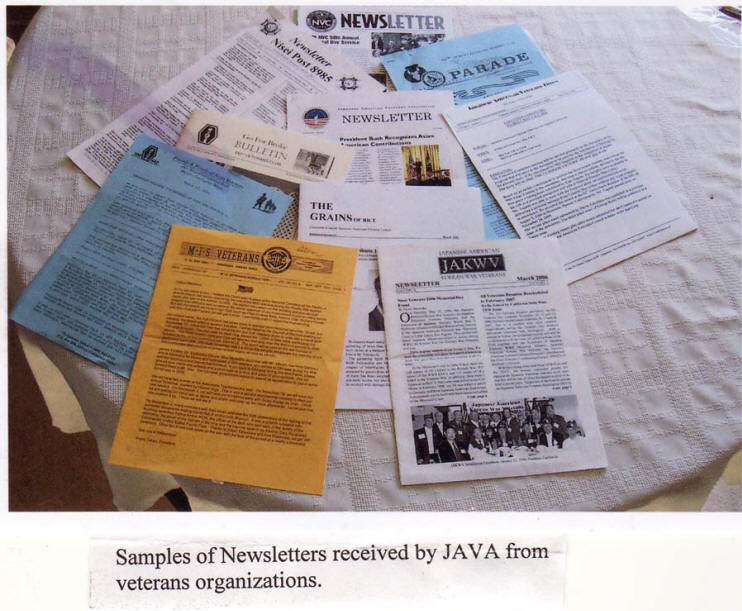 JAVA wishes to record its appreciation to:

MIS Veterans Newsletter, organ of  MIS Veterans Club of Hawaii.  Informational and educational in content, the Newsletter is published five times per year and the editor is James Tanabe.

One Puka Puka Parade, organ of the 100th Infantry Battalion Veterans Club, Hawaii.  It is a monthly with 20 pages (legal size paper) of data of interest to members. It makes good use of feature articles and speeches. It is an educational journal.  The editor is Joy Teraoka.

Go For Broke Bulletin, organ of the 442nd Veterans Club, Hawaii.  A quarterly publication, the Bulletin consists of some 50 pages of club information and reports of activities of all elements of the 442nd RCT, including the line companies, 232nd Combat Engineers Company, the 522nd Field Artillery Battalion, Anti Tank Company, Cannon Company, Medical Detachment,  206 Army  Band, and Service Company.   It is edited by Ron Oba.

NVC Newsletter, organ of   the (Seattle) Nisei Veterans  Committee.  The News/Story Editor is Stan Shikuma and the consultant is Sam Mitsui.  Consisting of  about 12 pages it is the only Newsletter we have seen that carries advertisements in a big way.  The Newsletter is impressive  in terms of  content and lay out.

Friends and Family, organ of the Nisei Veterans of the 442nd RCT and MIS in the Gilroy, California area, is  a one to four  page letter written and circulated about 4-5 times per year “when I can get to it”,  by its leader, Lawson Sakai,  Lawson thinks big and has arranged huge education projects such as the recently opened 442nd/MIS display, created by Brian Shiroyama, on the USS Hornet in Alameda, California.  Lawson has also just returned from taking an educational tour group to the battlefields of Italy and France.

The Cincinnati JACL chapter’s  organ publication is “The Grains of Rice”, published quarterly.  The editors are Frances Tojo, Chad Yoshikawa and Gordon  Yoshikawa.

The Veterans Times, organ of the National Japanese American Veterans Council, published every other month, is edited by Fred Murakami, former President of JAVA.  NJAVC has embarked on a major book writing  project:  the Japanese American role in the  Occupation of Japan to save the Peace.

The Patriotism Society Newsletter is the quarterly organ of the National Japanese American Memorial Foundation.  Gerald Yamada, acting executive director of NJAMF is the editor.

In the interest of expanding exchange, JAVA has sent via postal mail its June upgraded Newsletter to members and more veterans organizations,  some of which we know do not have  Newsletters.  JAVA wishes to expand this exchange.  Therefore, JAVA would appreciate receiving newsletters.  If via email Email it should be sent to Grant Ichikawa (g.ichikawa@cox.net), Mike Yaguchi (j006@verizon.net); Kay Wakatake (kwakatake@gmail.com) and Terry Shima (ttshima@worldnet.att.net )  Grant is responsible for the round robin; Mike is Deputy Executive Director; and Kay is Editor of the Newsletter.   If by postal mail please send it to: Terry Shima; 415 Russell Ave;  #1005; Gaithersburg, MD 20877;  ttshima@worldnet.att.net; 301-987-6746. Thirty