Over a half million visitors to New York City were exposed to a photo of 442nd Regimental Combat Team men during the last May’s  Asian Pacific American Heritage month.  A photo of F Company cadre, taken at Camp Shelby, Mississippi, was displayed by the US National Park Service (NPS) at the Statue of Liberty and Ellis Island.

The Japanese American Veterans Association (JAVA) asked the NPS why it decided to feature the Nisei and what message did they wish the photo to convey.  NPS Ranger Denise Foehr responded:  “A few months ago, I was asked to produce an exhibit for Asian Pacific American Heritage Month in May.  Unsure of an exact theme and attempting to connect the importance of this theme with the NPS, I started to research different sites, monuments, and parks that share the story of Asian Pacific influence in our nation.  While researching the history of the internment camps Minidoka and Manzanar, I came across an article about the 442nd RCT.  I found that this group’s story exemplified perseverance, bravery, and dedication.  What is more, they were unsung heroes. 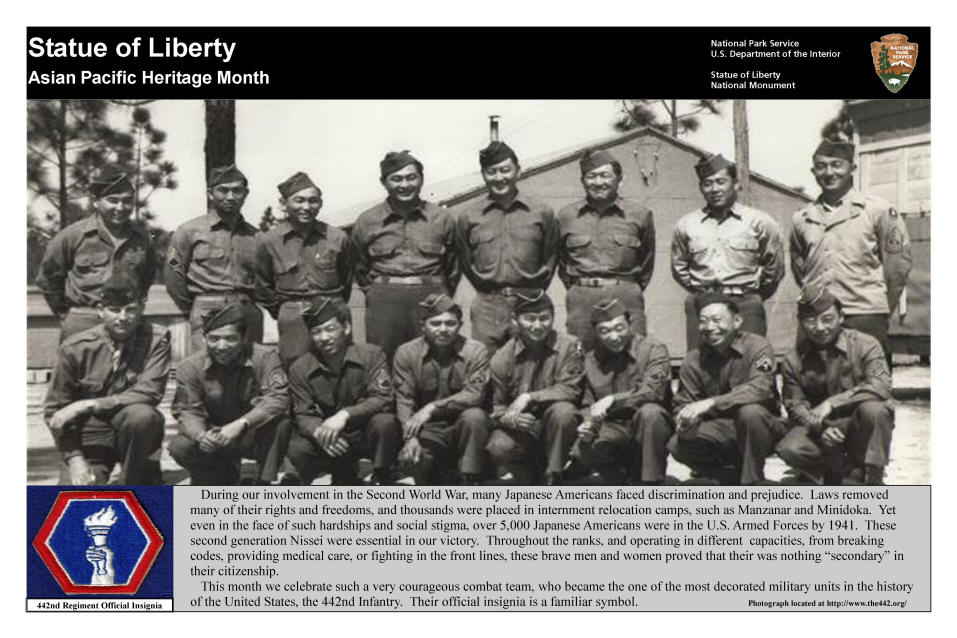 “Once I knew that this was the focus I wanted, I searched the internet for more information, and found Peter Wakamatsu’s website with photographs.  Mr. Wakamatsu and I corresponded, and he kindly granted permission for me to utilize one of his photographs for the exhibit.  With all of the wonderful photographs, it was difficult to choose just one that conveyed the message that I was looking for, but ultimately it was the group shot that won me over.  I wanted all of the thousands of visitors who visit us to celebrate these men; to see their faces, and to know their story.  I was unaware of how important the 442nd RCT was to the United States history prior to this research.  In a time of true adversity and prejudice, how could a team of people demonstrate their honor in a greater way?

“We all see many photographs of soldiers in our history books and on the television, this team of men should be publicized as much as possible.  I loved their story, and felt that especially in honor of American Pacific Heritage Month an exhibit illuminating these men was a necessity.  Below the photograph and the description of the 442nd Regiment, I inserted their official insignia, the torch and arm.  At first I was unsure if this torch belonged to the Statue, and so I contacted Mr. Wakamatsu again, who in turn contacted the artist of the insignia, and affirmed that it was indeed inspired by the arm of Lady Liberty.

“I cannot express the excitement that I felt as I connected these brave men with the symbol of freedom and liberty.  Lady Liberty’s flame, as I relay it to the public, is a beacon of freedom and liberty, not to just one group of people, but for everyone.  These men fought so valiantly during the war, risking, and for many losing, their lives for the same hope of protecting liberty, protecting freedom, and demonstrating that the message of the Statue should be extended to all Americans from all backgrounds.  The 442nd Regiment must be celebrated today as the heroes that fought for our country.  They are true Americans.”

Ranger Foehr said “visitation differs from month to month depending on the weather and holidays.  For the month of May, we had 264,298 visitors at the Statue of Liberty and 195,834 visitors at Ellis Island.”

George Joe Sakato of Denver, Colorado and Medal of Honor recipient for heroism in the rescue of the trapped Texas Battalion in the Vosges mountains of eastern France, said the NPS display carries a powerful message.  He said: “The NPS photo display of 442nd Nisei soldiers with their Army patch of the Torch of Freedom is a tremendous reminder to visitors that immigrants from all over the world have made America a great country.  For Japanese Americans, it was a hard fought recognition, at home and abroad. 30