On Friday, August 18, 2006, Kay Wakatake, was promoted to the rank of Major in the U.S. Army Judge Advocate Generalĺs Corps (JAG Corps) in Rosslyn, Virginia. Kay Wakatake is the editor of the JAVA newsletter, a board member of the Asian American Veterans Association, and is of Japanese and Korean descent. She has been serving in the U.S. Army JAG Corps since 1999. 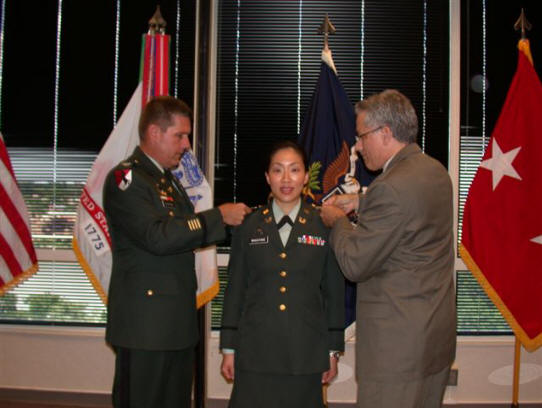 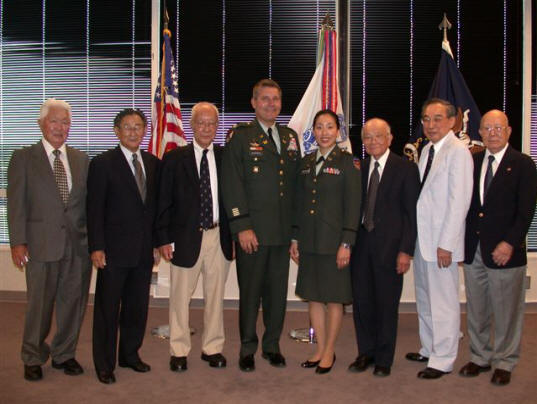 COL Warren began the ceremony with a brief background of the 442nd RCT and Merrillĺs Marauders, and then recognized each veteran individually. COL Warren praised the wartime heroism of the 442nd, MIS, and Merrillĺs Marauders, stating there was ômore valor among them than any other organization in the US Army.ö He also said that with ôMAJ Wakatakeĺs impressive academic background, she could have pursued a civilian career that commanded large financial benefits; however, like her predecessors, she answered the call to duty to serve her country. Promotion to a field grade officer position attests to her leadership potential, Warren concluded.ö
MAJ Wakatake also gave tribute to the veterans, stating to them ôyou have inspired me -- I have become a Major because you have broken down barriers, creating a bright future for the newer generation of Japanese Americans.ö As a token of her appreciation, she gave each JAVA member the Army the Judge Advocate General Corps Regimental coin. Many in the line congratulating MAJ Wakatake on her promotion also thanked the JAVA members for their military service.
Major Wakatake has been reassigned to her next duty station, at Charlottesville, Virginia. She has been selected for attendance at the JAG Graduate School for completion of a Master of Laws degree in Military Law. 30