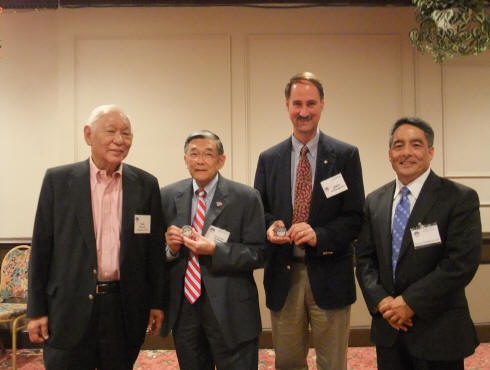 JAVA President Robert Nakamoto, in delivering the President’s report, noted that JAVA is pleased with the House of Representatives passage of the Bill to award the Congressional Gold Medal to the 100th  Infantry Battalion and the 442nd Regimental Combat Team and anticipates similar action by the US Senate.  He also highlighted Eric Saul’s building of an exhibit at Ellis Island Museum in New York City that will feature the Japanese American experience during World War II and the impact of this experience on future generations of Japanese Americans.  Finally, he noted JAVA’s providence in having present the two outstanding speakers, calling Secretary Mineta and Dr. McNaughton “role models for our youths”.

Before making his remarks, Secretary Mineta visited each table to meet his friends and admirers.  Then he recalled how his father and other Japanese businessmen abandoned their businesses when they were placed in internment camps, the physical and psychological hardships of camp life, his military service as an officer of the Military Intelligence Service, his political career starting at the City Council at San Jose, California, moving to the US House of Representatives, and ending as a cabinet secretary for two presidents.  Mineta made significant permanent changes in each of these positions such as the Civil Liberties Act of 1988, his signature accomplishment.  That act resulted in a public apology being made by President Ronald Reagan for the unjust internment of Japanese during WW II.

Dr. McNaughton, described “how the MIS Nisei story remains ever more relevant since the end of the Cold War.  During World War II American soldiers landed in Europe to defeat the Nazis and liberate the death camps.  It took combat power, and lots of it, including the brave Nisei soldiers of the 100th Infantry Battalion and 442d Regimental Combat Team.  While this ‘hard combat power’ continues to be needed, American today needs ‘soft power’.    This emphasis on "soft power" has led to a new appreciation for the MIS Nisei, who used language skill and cultural understanding to help defeat Imperial Japan and build a stable and democratic Japan,” McNaughton said.

Dr. McNaughton continued by saying, “Interest in the MIS Nisei continues in other ways as well.  For example, last year the Army awarded a contract to the Go For Broke National Education Center to collect oral history interviews from Nisei veterans of the Occupation of Japan which will result in a book about their experiences.  Organizations such as JAVA and Go For Broke play an important role in teaching all Americans about their shared heritage,” [For the full text of Dr. McNaughton’s remarks, please contact JAVA Executive Director Terry Shima at ttshima@comcast.net, 301-987-6746.]