PEOPLE OF VOSGES REGION OF FRANCE AND JAPANESE AMERICANS ENJOY 65 YEARS OF GOODWILL.  SENATOR AKAKA LAUDS THIS AS POWER OF HUMAN FRIENDSHIP

Bruyeres, France.  “They looked different but they shared their food, were kind to our children and the aged, respected our women, and could be trusted” said Robert Giron, Principal of Bruyeres High School, France.   “It is incredible how these villagers in the Vosges took an American outfit in their hearts and that this unique relationship has grown stronger with the passage of time,” said the late Shim Hiraoka, former 1st Sergeant of Headquarters Company, 442nd Regimental Combat Team (RCT) and prominent Fresno, California attorney in 1977 when he returned from his post-war visit to the Vosges region of northeastern France.   These observations reflected the views of the people of the Vosges and the veterans of the 442nd RCT.  There have been many exchanges of visits by groups and by individuals to renew bonds of friendship, to express gratitude and to search for people they met decades ago. 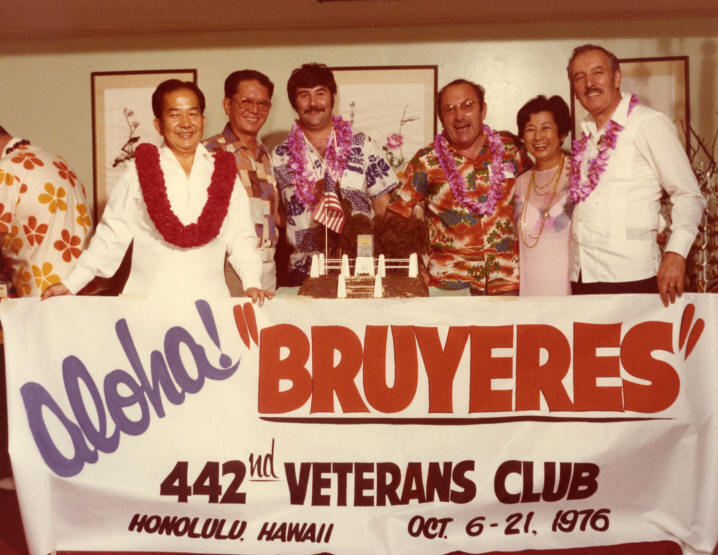 Lawson Sakai, Company E veteran of Morgan Hill, California, who made his first visit to the Vosges in 1969 and has just taken his ninth group of veterans and families in July 2009, said “I have announced that this was my last trip....but the spirit lives on .... I would hope that the younger generations, like the ones in our recent group, will continue to keep up the visits....anyway, many of them are corresponding with Herve’ Claudon and Gerome Villain, our young 36th Division historian friends .... time permitting, I am sure they will assist anyone or any group who visit the Vosges.”  Sakai said there are two reasons he keeps returning to the Vosges, the first being “I wanted to go back to where I thought I had died on October 28, 1944, when I was hit with a tree burst shrapnel in my back”.  Also, the Vosges people are “always so genuinely hospitable, friendly, caring and remembering.  I love them dearly,” Sakai said.  Villain and Claudon have done more than anyone else in recent times to develop historical data and to promote people to people goodwill between the people of the Vosges and the  Americans. They have a profound knowledge of the 36th Division, including 442nd RCT, and liberation of the Vosges region.

US Senator Daniel K.. Akaka. obviously pleased with this 65 year relationship said:  “Borne out of the ravages of war, the ongoing relationship between Japanese American World War Two veterans and the people of Vosges is a cherished reminder of the power of human friendship and collaboration.  Although they were from different cultures, worlds apart, these people bonded as a result of their common desire for freedom, peace, and liberty.  That their friendship has lasted more than six decades is a testament to the strength of their beliefs and their love for one another.”

In October 1944, the 442nd RCT was deployed from Italy to eastern France to defeat German forces which protected the gateway to the German homeland.  Hitler decided to make his stand in the Vosges region which gave him natural advantages over an invading force:  the weather, a shorter supply line, mountainous terrain and knowledge of the area.  Germany’s crack 736th Grenadier Regiment guarded Bruyeres.  The Germans were entrenched and their fortifications were well concealed and formidable, having controlled the area for the previous four years.  Hitler wanted the Vosges held at all costs.

On October 15, 1944, the 442nd, attached to the 36th Infantry (Texas) Division, attacked Bruyeres, a rail, commerce and communication center populated by about 5,000 people.  During this three day battle, artillery barrages were heavy and the infantry was engaged in fierce combat, including house to house fighting.   Most of the people of Vosges hid in their cellars. Seventy-one villagers were killed, 400 homes were damaged or destroyed and every window pane was broken.

Though engaged in incredibly heavy combat, the 442nd RCT did not waver and by nightfall on October 18, the enemy was defeated.  The 442nd soldiers were housed in schools, public facilities, and individual homes.  Wet and cold, 1st Sgt Hiraoka sought shelter for his men for the night.  He knocked on the door of a randomly-selected house.  A man named Giron opened the door, and Hiraoka asked him if he knew where he and his men could spend the night.  Giron showed him to an empty storage room that was used to store potatoes and onions for the winter. The villagers had no food and were starving when the 442nd entered Bruyeres.  Hiraoka learned that the villagers had not eaten for 13 days. He and his buddies gathered up food from their rations to feed the Girons.  Hiraoka noticed Giron had two daughters.  Concerned that Giron allowed them to stay only because they were part of an invading force, Hiraoka told Giron that he and his men would stay elsewhere.  Giron was grateful and insisted they stay.  This friendship between Hiraoka and Giron flourished and continues with their children. 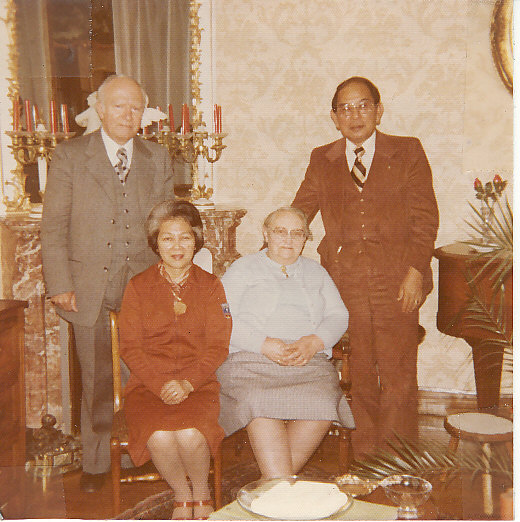 At another home there was a similar knock on the door.  Dr. Raymond Collin, who had just returned home after spending a long day at the Bruyeres hospital caring for the wounded civilians, saw a soldier figure at the entrance.   Collin could not make out if the soldier was German or American, when the soldier said “Don’t be afraid, we are from Hawaii,” assuring him that he was not in danger.   Also, the 522nd Field Artillery Battalion Tadashi Matsumoto’s knock on the door of another home was answered by Monsieur Henri Poiret.   He welcomed Matsumoto and his men.   In gratitude, Matsumoto gave his knife to Poiret, who displayed it in his living room.  When Matsumoto returned to Bruyeres in 1984, he was a guest at the Poiret residence for three days.   He noticed his knife still on display.

Mme. Josephine Voirin’s home in Biffontaine was filled with 30 Nisei soldiers, many severely wounded.  Mme Voirin provided aid and comfort to the wounded, but saw four of them die.   She remembered them as being kind and sympathetic. “They paid for the cabbages taken from the garden,” she said.  In 1978 Kazuo Yasuda of Honolulu and George Oshita, Company I, of Kapaa, Kauai and their wives joined a tour group to Bruyeres, where they visited Mme. Voirin, then hospitalized in a Bruyeres hospital.

In the village of Escarene in the Maritime Alps, France, the 442nd held a Christmas party for the children.  Maurice Zeller, a student, befriended Chiyoto “Hoppi” Kaneshima of Maui and this led to his regular visits to Zeller’s residence.   Many years later the Zellers made two visits to Hawaii to locate Kaneshima and finally found him in California.  The relationship continued and Kaneshima came to know four generations of the Zeller family   In 1974, Zeller entertained at their home two bus loads of 442nd veterans and their wives.  Maurice, who grew up to become a real estate executive in Escarene, built a home with a room for Kaneshima to stay “for a day or lifetime.”  Unfortunately, Kaneshima died before he got the chance to use his room.

The preceding examples of people to people diplomacy are unique in that they started in the ashes of war and became enriched over the years.  The 442nd's stay in Bruyeres was brief as they were soon ordered to liberate other locations such as Belmont and Biffontaine, to rescue the trapped "Lost Battalion" of the 36th Division, and to fight the retreating enemy to St. Die, where the 442nd was ordered to deploy to the Maritime Alps.

Though their presence was short, the behavior of 442nd men made a lasting favorable impression on the Vosges people.  While reconstructing their damaged homes and public buildings, the people of Bruyeres named one of their streets “The Avenue of the 442nd Infantry Regiment” and three years after the war built a monument on which was inscribed:   “To the men of the 442 and 100 Infantry Battalion who reaffirmed an historic truth here that loyalty to one’s country is not modified by racial origin…”   “The monument is always well kept with well-placed fresh wreaths and flowers”, John Tsukano, a 442nd veteran who was in the first group of replacements to the 100th Battalion, said each time he visited the Vosges independently or with tour groups he organized.  Tsukano visits were for the purpose of goodwill and data collection for his book, Bridge of Love.

Shim and Chiyo Hiraoka visited Bruyeres six times, during three veteran “pilgrimages” arranged by Hiraoka and three personal trips.  In 1977, Hiraoka located the Girons in Nice and a warm reunion was arranged.  On that trip, Hiraoka met Dr. Collin in Bruyeres. A warm friendship had begun.  In 1985, Dr. Collin and his family visited the Hiraokas.   In 2008, four years after Hiraoka’s death,  Chiyo made her seventh trip to France and visited Dr. Collin.  His health had been rapidly failing, but learning of her plan to visit, he began to eat again, determined to see her. It was a moving visit, most likely the last time they would see one another.  Dr. Collin keeps Hiraoka’s photo on his bedside table.  Hiraoka volunteered from the Gila River internment camp one month after he and Chiyo married.  “We had to volunteer for combat to prove our loyalty.  I was willing to risk my life for my country.  There was no other way,” Hiraoka said.

In 1972, Japanese Americans from Hawaii chartered a plane to fly to Bruyeres for the annual Liberation Day celebration.  Two years later, 280 veterans, their wives and families visited the Vosges.  In 1976 some 66 people of the Vosges spent 16 days in Hawaii, where veterans prepared programs on various islands. The visit was arranged by Pierre Moulin, son of Max Henri Moulin, French underground leader who helped Americans find their way in the forests.   In 1978 the Hawaii delegation to the Vosges included the Kailua High School Madrigal singers, a remarkable promoter of tropical goodwill.  On their return visit to France, the French visitors met with veterans of the San Francisco Bay area for another round of reunion activities.

Bill Thompson, Headquarters Company, 2nd Battalion and President of 442nd Veterans Hawaii said “On November 1, 1960 a resolution was passed by the Honolulu City Council creating a twin sister-city relationship between Honolulu and Bruyeres.  This cemented the strong bond of friendship shared by these two municipalities. While the aging veterans find it difficult today to make the long voyage to re-visit the Vosges region, a new and younger generation, which call themselves Sons and Daughters, is expected to keep the "Go For Broke" torch of friendship burning.”

In addition to these groups, the people of Vosges have opened their homes and hearts to visits by thousands of individuals and small groups.  Billy Tucci, graphic novelist, was escorted to the rescue site to prepare for the writing of a six series comic book entitled Sgt Rock:  The Lost Battalion.  The Bruyeres officials were so impressed with Tucci that they conferred on him the title of  Ambassador, de la region de Bruyeres.  Others, like Janet Hardwick, daughter of a Lost Battalion veteran, will happily discuss with anyone the warm hospitality she and members of her family have received when they visited the Vosges. [Trudy Hiraoka, Claire Mitani, Donald Wakida, Gerome Villain and Fernand Paul Didier assisted in the preparation of this article. Didier, who served in the French Army but was assigned to the 36th Division was awarded the Croix de Guerre at age 17] 30