The Secretary of  Interior, Mr.Dirk Kempthorne, and the Ambassador of the Republic of Korea, Lee, Tae Sik, also spoke.  Members of the US Congress, representatives of federal agencies, and five ambassadors sat on the speakers stand.  Military attaches of the 21 nations that fought in the Korean War and 12 US veterans service organizations (VSO) also participated in this event.

President George W. Bush issued a proclamation on July 27 that called on the American people to celebrate this day with appropriate ceremonies and activities.  Anthony A. Williams, Mayor of Washington, D.C. also issued a proclamation that marked July 27, 2006 as Korean War Veterans Armistice Day.

The Korean War Memorial attempts to express the “enduring gratitude of the American people for all who took part in the Korean conflict” and to project the “spirit of service and dedication to the cause of freedom”, according to the program pamphlet.

The Asian American contingent was composed of the following representatives:

Mr. Gregory L.  Kee, a Senior Executive Service official of the Army Materiel Command at Ft. Belvoir, who represented WW I veterans.  His great uncle, Army Private Sing  Kee, who served in combat in France, was awarded the Distinguished Service Cross, the nation’s second highest award for extreme gallantry and risk of life in actual combat with an armed enemy force.

WW II veterans were represented by veterans of the famous 442nd Regimental Combat Team, Mssrs. Terry Shima and Yeiichi Kelly Kuwayama.  Mr. Kuwayama is a highly decorated combat medic, having been awarded the Silver Star, Bronze Star, Purple Heart and decorated for bravery by the governments of France and Italy.  Mr. Shima, who succeeded Mike Masaoka as head of 442nd Public Relations, returned with the unit to  handle  its public relations in  New York City, march on Constitution Avenue and the Presidential review in Washington, D.C. and the inactivation of colors in Honolulu. 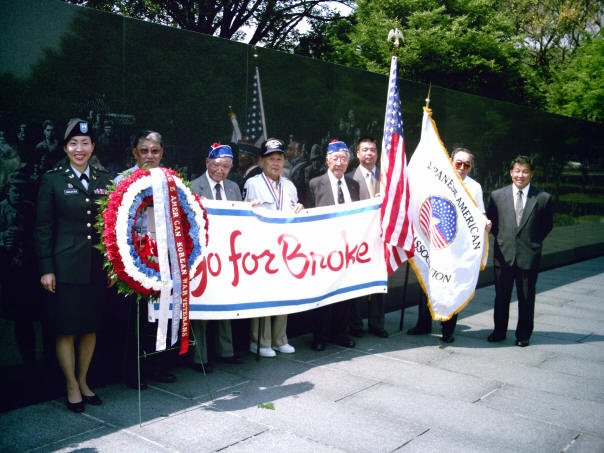 Mssrs. Gene Takahashi and Chosei Kuge represented the Korean War.  Mr. Takahashi is one of very few American prisoners of war who escaped after capture from the Chinese and eluded recapture by joining Korean refugees in their trek south by wearing native peasant’s garb.  Mr. Kuge served in Korea as an Army radio/phone operator.

Mr. Royce Y. Nakatani and Captain Kay Wakatake.  Mr. Nakatani, a retired Sergeant Major in the Adjutant General Corps, is a Legion of Merit holder.  Captain Wakatake, soon to be promoted to Major, is a lawyer in the US Army Judge Advocate General Corps.

The contingent laid a red, white, and blue carnation wreath that contained three streamers of the Asian American Veterans Association (AAVA), the Japanese American Veterans Association and the Japanese American Korean War Veterans (JAKWV).   The AAVA, now under development, serves as the vehicle to unite under one banner the Asian and Pacific Americans in and out of the Armed Forces.  The JAKWV, presently under the leadership of president Victor Muraoka, was organized in 1996 in Los Angeles, California, to bring together Americans of Japanese heritage to help perpetuate the memory of those Japanese Americans who gave their lives during the Korean War.