Ellis Island, New York City.   Celebrating the 65th anniversary of the end of World War II, the exhibit, “Go For Broke: Japanese American Soldiers Fighting on Two Fronts,” will be dedicated in a special event on Sunday, August 8, 2010, at the Ellis Island Immigration Museum, at the Statue of Liberty National Monument in New York.  Actor George Takei, who played Captain Sulu of Star Trek, is expected to be the master of ceremony.  The keynote speaker will be Major General Kelly McKeague, USAF who will represent Admiral Mike Mullen, Chairman of the Joint Chiefs of Staff.

The exhibit, which will be open daily, chronicles the history of the Japanese American soldier in World War II, including the story of the courageous Nisei soldiers of 100th Infantry Battalion and the 442nd Regimental Combat Team, While some 14,000 served with the 442nd,  approximately 4,000 Japanese Americans also served in the Military Intelligence Service in the Pacific campaigns.

The 442nd has been recognized by the US Army as the most decorated military unit for its size and length of service in US military history. The 100th and other battalions of its parent unit, the 442nd, suffered a casualty rate of 314%.  Japanese American soldiers fought with extraordinary heroism in eight campaigns in Italy, France and Germany.  During the war, the unit received seven Presidential Unit Citations.  Overall, the Nisei solders were awarded 21 Medal of Honor and 29 Distinguished Service Cross awards, the first and second highest awards for valor.  Thousands of others were decorated with other medals for heroism and received more than 4,000 Purple Heart medals for wounds received in battle. 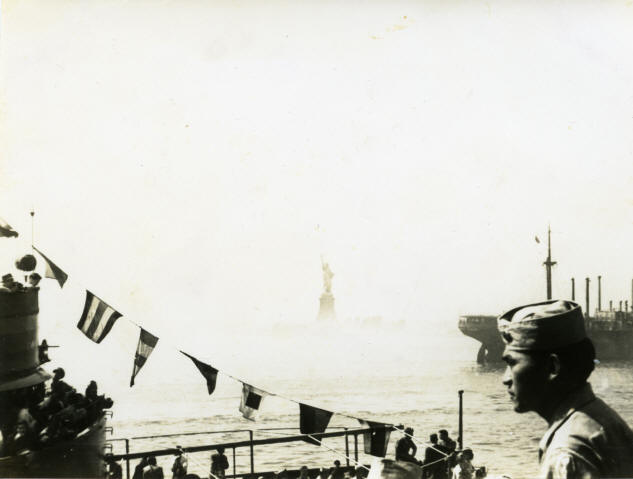 The 442nd Regimental Combat Team arrived in New York City from  combat duty in Italy in early July 1946
aboard the troopship Wilson  Victory  to a welcome celebration rarely seen in that city.  A 442nd soldier aboard
the Wilson Victory observing the Statue of Liberty   US Army Signal Corps  photo.

After Pearl Harbor was attacked, Japanese American men of draft age were reclassified from category 1-A, (fit for military service) to 4-C (Enemy Alien), unfit for military service, and were barred from serving in the military. Just one year later, in1943, they were reclassified as 1-A, in part due to the conspicuous record of the 100th Battalion, later absorbed into the 442nd Regimental Combat Team with three other battalion of Japanese Americans.

At the same time, the Army recruited Japanese Americans to serve in one of the most sensitive branches, the Military Intelligence Service.  They served throughout the Pacific theater as language and intelligence specialists.  By the war’s end, they were credited with saving countless lives, both American and Japanese. Nisei men and women of the MIS also played a crucial role in the postwar occupation and reconstruction of Japan.

In one of the ironic twists of the war, Japanese American soldiers of the 522nd Field Artillery Battalion, an element of the 442nd,  liberated one of the subcamps of Dachau.  They accomplished this while their families were incarcerated back home in American detention camps.

The Nisei soldiers received commendations from virtually every major commander with whom they served in Italy, France, Germany and in the Pacific.  Yet, when they returned home, they were greeted by signs of “No Japanese Allowed” and “No Japanese Wanted.”  Many veterans were denied service in shops and restaurants.  Some Japanese Americans houses, farms and property were vandalized.

A number of the heroic Japanese American soldiers will be attending this program in their honor.  These decorated veterans are coming from all over the United States.  Most of these veterans are in their late 80s or early 90s.

A special premiere showing of the award-winning documentary film “442: Live with Honor, Die with Dignity” will be shown at 2:00 pm in Theater 2 at the Ellis Island Immigration Museum.

For information or to schedule a visit, contact the Statue of Liberty National Monument at (212) 363-3200 or visit the National Park Service’s website for Ellis Island at http://www.nps.gov/elis.  The Ellis Island museum is accessible by ferry from both New York and New Jersey.  For ferry tickets, call 877-523-9849 or book online at http://www.statuecruises.com/.  If you are taking the ferry from New York and you want to see the exhibit only, get off at the second stop on the ferry.  Boats leave from Battery Park in New York City every 20 minutes beginning at 8:30 am; boats leave from Liberty Park in New Jersey every 40 minutes beginning at 8:30 am. 30