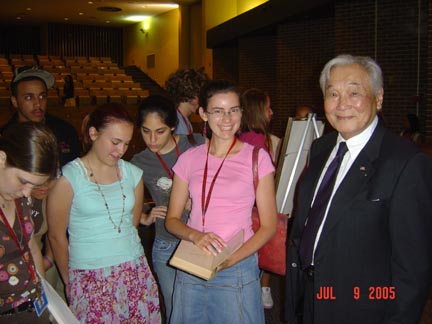 Japanese American Veterans Association Speakers Bureau, under the chairmanship of Dr. Norman Ikari, fielded thirteen speakers for nine events during the period between mid May and mid July. These engagements were to educate the public on Japanese American heroism in combat overseas while their families were forcibly incarcerated in US Army run internment camps at home. The speakers attempted to convey two messages: that the Government violation of citizens’ civil rights must never occur again and that the price of freedom is dear, paid for by 811 Japanese American patriots who sacrificed their lives in WW II, 246 in the Korean War and 115 in the Vietnam War.

On May 11, 2005 Dr. Warren Minami served on the Department of Veterans Affairs four person panel to discuss Asian American issues in assimilating in the American society. Dr. Minami said the "incarceration of 120,000 Japanese Americans from the West Coast is a single worst civil rights violation in US history" and we must be vigilant that it is never repeated.

On May 25 Colonel Jimmie Kanaya, Ret., Gig Harbor, Washington, was invited by the Asia Pacific Islanders at Ft. Sill Oklahoma to speak on the theme: "Liberty and Freedom for All". In addition to discussing his family’s internment experience, he discussed his 33 years experience in the military, including being a medic in the 442nd and his POW experience in Poland. He used the occasion to encourage the soldiers on the importance of continuing education and he also paid tribute to the men and women in the armed forces.

On May 26 Mr. Yeiichi Kelly Kuwayama served on the Library of Congress panel discussion that included Columnist Art Buchwald and John Dolibois, the last surviving interrogator of the Nurenberg War Crimes Trial. Mr. Kuwayama, a combat medic of Co E, 442nd, told the audience he was drafted into the US Army before the Pearl Harbor attack. He was not trusted because he was a Japanese American. He was transferred from the coast artillery to Ordnance, to Quartermaster, and to the medical corps from which he volunteered for the 442nd Regimental Combat Team In the previous month, Mr. Kuwayama was the opening banquet speaker at Princeton Asian Alumni reunion.

On May 30 Mr. Terry Shima appeared on a 30 minute C-Span talk program that discussed the Library of Congress Veteran History Project. Mr. Shima, also a WW II veteran of the 442nd Regimental Combat Team, talked of the contributions made by Japanese Americans in WW II, the Korean War, Vietnam War and now the Gulf Wars.

On June 6 Mr. Ichiuji spoke to about sixty 10th grade students at Urbana High School in Frederick County, Maryland as part of the WW II history course. He made the point that despite their incarceration, under watchful eyes of Army sentries, the Japanese Americans volunteered for combat duty to prove their loyalty. On May 31 the Library of Congress informed Mr. Ichiuji that his oral history interview was selected for the Library’s website which appeared on July 4, 2005.

On June 9 Mr. Paul Tani and Dr. Ikari,. two of the 41 visitors who spent all day at the Rocky Run Middle School at Chantilly, Virginia, allowed students, in groups of five, to interview them. Dr. Ikari said this unique format is the first he has experienced in four years. They also made a presentation to a class. Mr. Tani attempted to convince the students that "I never wavered in my loyalty to America and I am proud of the way America eventually atoned for the severe illegal mistakes in forcibly evacuating, relocating and resettling Japanese Americans. Mr. Tani explained how the Japanese American Internment took place, his experiences at an assembly center and a relocation center, and President Ronald Reagan’s "Here We Admit a Wrong" apology.  lkari discussed his combat experience on the Italian front.

On June 16 Dr. Ikari and Ms. Yuka Fujijkura spoke to 40 National League of Cities employees in Washington D.C. Fujikura described her incarceration in Tule Lake Camp. Ikari related his military experience, the heroics of the 100th Battalion and the 442nd Regimental Combat Team and the over 18,000 individual awards they received.

On July 8, 2005 Ms. Cherry Tsutsumida and Mr. Victor Matsui spent the day at the Virginia Commonwealth University, Richmond, Virginia,  talking to a select group of 36 high school students of the Japanese Language Academy. The JLA  is the Governor’s program to expose the students to Japanese language and culture. Ms. Tsutsumida related the lessons America learned from the internment of 120,000 Japanese and Mr. Matsui discussed the Japanese American soldiers’ loyalty, duty, and commitment to America relating those attributes to their Japanese heritage. In response to a question by a teacher as to what the Academy may do for JAVA, Matsui replied: "Please pass the word that Nisei soldiers of WW II fought hard to prove their loyalty in the face of enemies abroad and racial challenges at home."

The following remarks were sent to JAVA by four Virginia students and their mentor.

of  Poquoson High School, Poquoson said: "Democracy, life, citizenship, civil rights, and guaranteed liberties are all things a common American citizen takes for granted. … The 442nd Regimental Combat Team and other units did not just fight for the sake of the country. … They fought for their families, their houses, their lifestyles, their everything. … From this experience, I learned that freedom has no price. … No matter how you act, you must always remember that nothing is ever guaranteed. … Take the time to learn not just of your culture and history, but of everybody’s background. This cultural awareness will help bring modern society closer together."

of Bruton High School, Williamsburg said:  "Mr. Matsui stated that for him, Americanism means freedom. I agree with him and I would also like to add that for me Americanism also means equality for all nationalities. … I truly admire Mr. Matsui’s continual love for America even after what America did to him and many other Japanese Americans. … Because Mr. Matsui’s horizons were limited, he encouraged us to go out and do all that we could do and to never limit ourselves. That is one advice that I will do my best to follow. … My horizons have opened and I am proud to be a Korean-American."

of  Langley High School, Great Falls said: " … Both these guest speakers lived through one of America’s greatest injustices and it’s a period that America isn’t proud of. I feel privileged to have heard their stories, for now I can pass along a version of a time in America  that many choose to ignore. America may be the epitome of democracy, but it must be remembered that the United States isn’t perfect. Now more than ever, what with the situation concerning Muslim Americans and the issues in the Middle East, this country must be reminded that a great injustice was once committed, and it should never be allowed to happen again."

Christine Stoddard, Yorktown High School. Arlington,, said: "After surviving one of the greatest atrocities ever committed by humanity, they still had enough courage to visit my Japanese Language Academy to speak about it." In talking about the National Japanese American Memorial to Patriotism, she continued "the Memorial brandishes two cranes tangled in barbed wire, symbolizing the imprisonment of Japanese-Americans….but the cranes are not weak---with open wings, they attempt to escape, showing that the Japanese Americans will always fight for their freedom."

Ms. Jennifer Larson, mentor of the Academy, said   "Mr. Matsui and Ms. Tsutsumida shared important historical lessons and personal experiences. From these personal encounters, our students gained a real understanding of the Japanese American experience during WWII and the importance of applying that knowledge today. The youth of today must be vigilant in protecting the civil rights of all Americans, especially in times of conflict."