Washington, DC.  General Ryoichi Oriki, Chief of Staff, Joint Staff of the Japan Ministry of Defense and the highest ranking officer of Japan’s armed forces, visited Washington, DC for high level meetings with US defense officials.  During the course of his two-day Washington visit, General Oriki visited the National Japanese American Memorial to Patriotism on June 26, 2010, located near the US Congress building, where he was briefed by representatives of  the Japanese American Veterans Association (JAVA) and the National Japanese American Memorial Foundation (NJAMF).  Major General Mitsuru Nodomi, Defense Attaché, Embassy of Japan, accompanied General Oriki on his visit to the Memorial. 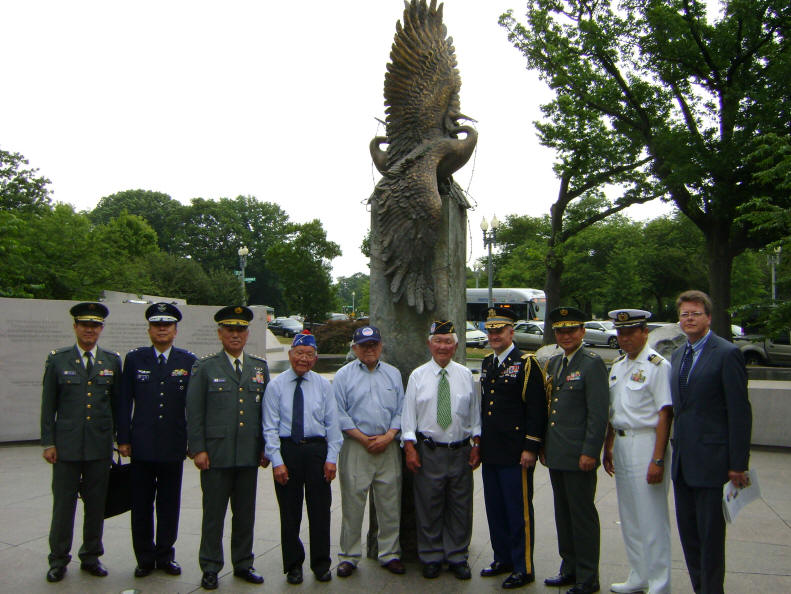 General Oriki was briefed on the situation that led up to the evacuation and internment, the 100th Battalion and the 442nd Regimental Combat Team, the Military Intelligence Service, and the Japanese American Memorial to Patriotism.  Mr. Terry Shima, Executive Director of the JAVA, discussed the combat role of the 100th Battalion and the 442nd  Regiment in Europe while Mr. Grant Ichikawa, also of JAVA, described his internment and his role in the Military Intelligence Service in the Pacific. Also, Dr. Ray Murakami discussed the significance of the Memorial to Patriotism.

General Oriki said he appreciated the candid remarks about the World War II experience of persons of Japanese ancestry, the loyalty and exemplary performance of the Nisei who served in their nation’s armed forces, and the greatness of the nation in offering a public apology at the highest level for the internment.  The General congratulated JAVA and the NJAMF for their efforts towards the building of solid friendship between the government and people of Japan and the United States, including the Nikkei community.

General Oriki, a native of Kumamoto prefecture, is a graduate of the National Defense Academy in 1972.  In August 2004, he served as Vice Chief of Staff, Japan Ground Self Defense Force. In 2005, he was Commanding General of the Middle Army and in March 2009, he was appointed to his present position.

The National Japanese American Memorial to Patriotism was constructed in 2000 and is managed by the National Park Service.  It serves as a public reminder that what happened to an ethnic minority group must never happen again.  The names of over 800 Japanese Americans who died in line of duty during World War II are etched on the Wall of Heroes.  30