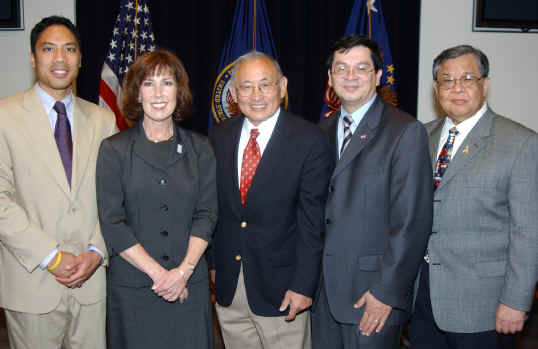 (1) Provide a brief background of political liberties for which your culture has had to fight to obtain freedom as a basic individual right.

(2) Give an example of an obstacle, barrier or stereotypical attitude you faced that you’ve had to overcome for an improved understanding.

(3) What challenges face Asian Pacific Americans while they assimilate into the American way of life and maintain their cultural heritage.

Mr. Eddy Badrina, age 29, recognized his more senior panel members as veteran trailblazers who made life and jobs easier for his generation. He cited his Filipino background and described how the legacies of his two grandfathers, who both fought for the preservation of freedom in WW II, impacted on him. He noted that "President George Bush, Congress and the Department of Veterans Affairs have made definite steps to improve the situation relative to veterans, reservists and active duty personnel [and] I will endeavor to attempt to obtain the benefits that the Filipino and other APA veterans deserve and have earned."

Badrina said there are two myths faced by Asian Pacific Americans that are obstacles to integration into the American society. One is that APAs are a model minority, that they work harder, are more intelligent and are better off. The truth is that within the APA group there is a disparity and the less advantaged socially and professionally should be helped in achieving their goals. The second myth is "a generational myth, that we are all immigrants or descendents of immigrants and cannot speak English correctly. I was born in Texas and speak English with a Texas accent. Yet, like other APAs, I must constantly demonstrate that I am not different from others," Badrina said.

Badrina said APAs are struggling to overcome the myths to find ways to assimilate into the American society and yet retain their cultural and ethnic identities. He cited as an example a young Asian American TV star who is attempting to find a niche in the TV world. Badrina said he is working with APA businessmen to help them overcome barriers and to encourage them to take advantage of benefits offered by the federal government so they could assimilate their businesses into the mainstream of the business world. "I must constantly demonstrate that I am not different from others," Badrina said.

Mr. Ed Chow, a Washington state resident, explained that his parents ran a Chinese restaurant in Seattle, judged by Esquire Magazine as one of the 20 best restaurants in the US. They had to engage a Caucasian initially to buy the property and re-sell the property to my parents, in order to do business at that location. He was paid a yearly fee for that service.

The University of Washington Dental School limited the number of Asian American students in its dental school: two Chinese Americans and one Japanese American with the Chinese-Japanese ratio alternating each year. Other ethnic groups were not bound by this practice. Despite these discriminatory practices, the APAs chose not protest, they endured and persevered. These anomalies have since been corrected.

Chow said he learned a bitter lesson about stereotyping at age 10 and the challenges faced by APAs. While busing dishes in their restaurant, he overheard a man asking his wife how much tip he should leave. His wife responded: "ten cents, they are just Chinese". When he asked his mother what did the statement mean, his mother ordered him to shut up and bus the dishes. Chow said every time the APAs do something different they are viewed as being sly, can’t be trusted, non joiners. The APAs reaction was to work harder and longer than anyone else.

Chow said "I don’t look at this country as an ethnic melting pot but as a salad bowl: lettuce, radish, onion, and other ingredients each distinctive and individual. When they are put together they maintain their identities. If you look at the roster of servicemen in Iraq you see a diversity of ethnic origins all united to achieve a single goal. There was Rafael Peralta, an immigrant who obtained a green card, joined the Marines, went to Iraq, became a US citizen, and during a major battle he was shot and went down. When the enemy threw a grenade in the midst of his men, he reach out and brought the grenade to his body to save his fellow soldiers. That is what America is about: we care for each other, we are all part of each other, and yet each is distinctively different. Also, he followed the code of the Marines."

Eric Lachica, son of a Filipino American WW II veteran who was buried with full military honors at an American military cemetery in California, said that the Filipinos fought US colonial occupation and President William McKinley’s goal was to "civilize and Christianize" them when the Filipinos were already Catholics for over 200 years. As the result of the Philippine Independence Act of 1934, 120,000 Filipinos were drafted into the US Army, that 10,000 Filipino prisoners of war died during the Bataan death march and that after US surrendered, Filipino guerrilla forces fought to disrupt enemy operation and collect vital intelligence

Lachica said that the battle to retake the city of Manila cost 100,000 Filipino lives when they were used as human shields by the enemy forces. In 1946 the US Congress passed the Rescission Act that stripped away US benefit status for Filipino American veterans President Harry S. Truman objected saying the Philippine Army veterans are veterans of the US Army who fought for its flag and under US officers. Lachica said his Coalition’s goal is to restore US recognition and Filipino American veterans benefits.

As for obstacles that Filipino Americans had to overcome, "I can only cite my father’s case which represents about 200,000 in similar situations faced by his colleagues," Lachica said. His father was a victim of that 1946 Rescission Act. In 1989 he applied for VA medical care at the Los Angeles VA Medical Center. When he was rejected, he was crushed because, as an American citizen, he was denied what he had earned and deserved.

Lachica said "because of this clearly unjust situation, our leaders formed a coalition with major American veterans organization such as the VFW, the American Legion, and other veterans service organizations to support bills introduced by decorated WW II veterans like Senator Daniel K. Inouye of Hawaii and Congressman Benjamin Gilman of New York. We have accomplished a lot such as burial benefits , war related compensation, grant to the Philippine Government Veterans Medical Center, and medical benefits to Filipino American veterans living in the US. The work is not over, the playing field needs to be leveled a little more.

The biggest challenge facing Filipino and Asian American leaders today is to overcome immigrant minority passivity and to increase their participation in the mainstream of American politics -- not as immigrants with emotional baggage of guilt and quiet assimilation. A White House official’s remark ten years ago as to why it took so long for Filipino veterans to surface their issues "buttresses my point that we should be more assertive." US Army Major General Antonio Taguba, son of a Bataan defender, has been a rallying exemplar for Filipino Americans to accomplish their mission, Lachica said.

Dr. Warren Minami said Japanese Americans, as did other Asian Americans, suffered indignities and discrimination similar to the experiences of African Americans. This included segregated schools, inability to gain citizenship, restrictions on immigration, excluded from land ownership by immigrants, and general exclusion from business and professional employment. Minami said President Franklin D. Roosevelt’s Executive Order (EO) 9066 which incarcerated 120,000 Japanese Americans from the West Coast to desolate locations in the US is a single worst civil rights violation in US history. Further, American citizens were classified as enemy aliens, discharged from the military service, and placed in these camps. President Jimmy Carter’s Commission concluded that E.O. 9066 was based on war hysteria, racial prejudice, failure of political leadership, and economic gains. There was no conviction for acts of sabotage by Japanese Americans.

The reactions of the Japanese Americans were to prove their loyalty beyond any reasonable doubt. This involved patriotism that is love of country which stands as an example for all to follow. Ironically, this attitude and value system stems from their heritage and strong need to maintain ones honor for the country, family and self.

The US Army, realizing the potential value of Japanese Americans fluent in the Japanese language and who understood the Japanese custom and ethos, recruited them for the Military Intelligence Service. Fourteen of the best linguists were assigned to the Merrill’s Marauders and another 14 were assigned to the Office of Strategic Services which fought behind enemy lines in Burma and China. Yet all this bravery went unnoticed for many years as a military secret.

The members of the 100th Battalion and 442nd Regimental Combat Team, which fought in Italy and France, received over 18,000 individual awards including 21 Medals of Honor, 33 Distinguished Service Crosses, over 5,000 Purple Hearts. There was no case of desertion or being Absent Without Leave (AWOL) except for soldiers who left the hospitals, without approval, to return to their units.

Even today, attitudes exist toward those who look different from Caucasians. Many of the Southeast Asians have experienced problems. Only recently, a Japanese American with several other Asian Americans faced discrimination in an officer candidate school being dismissed just before graduation. This individual fought the issue in the courts and won. Changes in the Marine Corps training program have resulted.

Minami noted that there was a strong move to incarcerate Arab Americans following 9/11 purely on suspicion and ethnic background. However, that move was questioned by a strong public outcry and the comments of statesmen like Senator Inouye and Transportation Secretary Norman Mineta. Mineta made it clear that public hysteria based on unproven suspicions, such as that which caused the Japanese American evacuation, is unjust. Minami concluded "we (Asian Americans) must identify ourselves as Americans…, we must apply to all Americans the lessons learned from the Japanese American WW II experience." 30