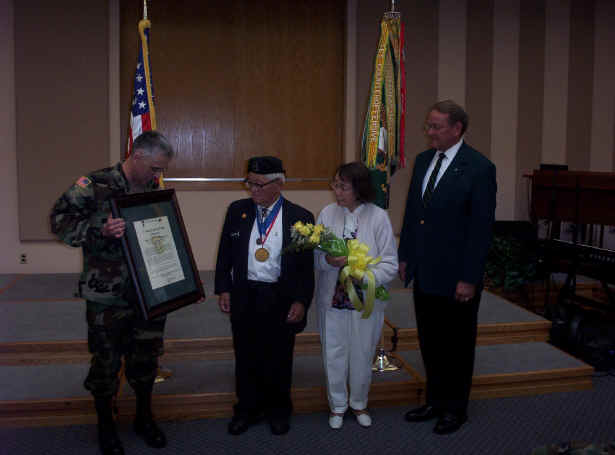 In an earlier letter to Matsumoto, Major General James W. Parker, Commanding General of US Army Special Forces, Fort Bragg, North Carolina recognized Matsumoto’s "distinguished service in the Merrill’s Marauders in Burma and later with the Office of Strategic Services in China. The accomplishments of you and your fellow comrades set the stage for today’s Special Forces who are at the forefront of the War on Terrorism".

Matsumoto was born in Los Angeles, CA, attended middle school in Japan for nearly four years and was incarcerated at the Jerome, Arkansas internment camp, from where he volunteered for the Army in November 1942. He was selected for the Military Intelligence Service (MIS) Japanese Language School at Camp Savage, Minnesota. Upon graduation he was sent to Camp Shelby, Mississippi for basic infantry training with the 442nd Regimental Combat Team. He was one of the 14 Niseis selected for what President Franklin D. Roosevelt called "dangerous and hazardous duty" – to serve with the 3,000 strong 5307th Composite Unit, Provisional, better known as the Merrill’s Marauders after its commander, Brigadier General Frank D. Merrill.

The ultimate mission of Merrill’s Marauders in Burma was to capture the town of Myitkyina thereby controlling the all weather airfield and the Burma Road that were essential for air and land transportation of war material to the Nationalist Chinese forces. To accomplish this they needed to get behind enemy lines to intercept or destroy enemy communications, disrupt supply lines and defeat the greatly outnumbered enemy. While the Marauders did this quietly and without fanfare a Nationalist Chinese division operated frontally.

By the time the Marauders got to Myitkyina, they had marched 700 miles, hacked their way through heavy jungle undergrowth, clambered over mountains and waded through leech infested waters. They were also vulnerable to dysentery, malaria, and mental and physical fatigue. Along the way they fought five major battles against the crack Japanese 18th Division, which played a vital role in the fall of Singapore, Malaysia and Burma. Merrill’s Marauders accomplished its mission in six months but its strength had depleted to 200 from the original 3,000. The War Department was almost correct when it predicted there would be 85% casualty. It was deactivated in August 1944 and was succeeded in Burma by the 5332nd Brigade, Provisional, popularly known as the Mars Task Force.

General Fred C. Weyand, former Chief of Staff of the U.S. Army and a former staff officer of General Joseph W. Stilwell, Commanding General of Allied Forces in the China, India, Burma theater in WW II, served with Sergeant Matsumoto at Myitkyina and later in Chungking, China. General Weyand was intimately familiar with Merrill's Marauders and Sergeant Matsumoto's Nisei Intelligence Detachment. Weyand said, "Sergeant Matsumoto was a hero among heroes. He and his unit of Nisei intelligence specialists are widely credited by war historians as having directly contributed to the shortening the end of the war."

Although they served primarily as linguists, the Niseis fought as combat soldiers. Looking like the enemy, they risked being shot at by both the Japanese and American forces. They could not risk getting captured because this would disclose to the enemy the US had this unique resource and bring harsh reprisals against their families living in Japan. Matsumoto had three brothers and a cousin, all US citizens, serving in the Imperial Japanese forces. His two sisters and his mother were also living in Japan. They all survived the war. Matsumoto’s younger brother, the late Colonel Tom Matsumoto, also served in the U.S. Army.

On March 5, 1944, when the Marauders 2nd Battalion emerged from the jungle of Walawbum, Matsumoto discovered what appeared to be a telephone line at the tree tops. Matsumoto borrowed a telephone handset from 1st Lt. Philip Piazza , Commanding Officer of the 2nd Battalion Heavy Weapons Company, climbed a tree that provided the best cover, confirmed it was the enemy telephone line and tapped it. He learned of the location of the enemy ammunition storage, passed the information to his Commanding Officer, who called for a P-51 airstrike that demolished the target.

While he was vulnerable to enemy snipers, Matsumoto spent all day on the tree collecting valuable tactical intelligence for other bombing targets and deployment of troops to out-maneuver the enemy. Matsumoto received the Legion of Merit for this feat. His citation, for security reason, read simply: "For exceptional meritorious conduct in the performance of outstanding service from 24 February 1944 to 11 March 1944".

: "Master Sergeant Roy Matsumoto's efforts behind enemy lines in Burma were admired by all Marauders.   His bravery under very  adverse conditions was exemplary.  We are deeply grateful for his extraordinary exploits which prevented many more casualties.    Matsumoto and thirteen other Niseis did an outstanding job for the 12 combat teams that they served as military intelligence specialists." 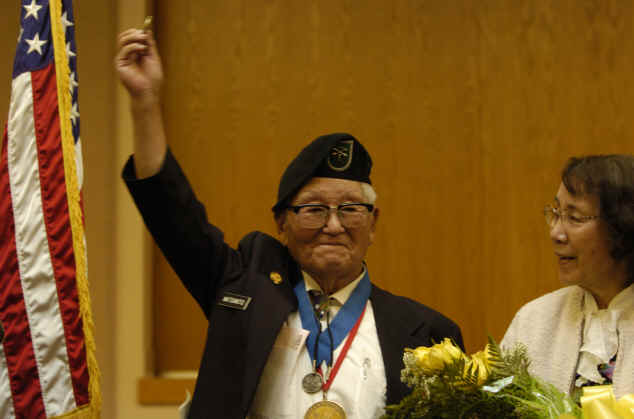 A month later Matsumoto’s battalion encountered superior enemy forces in Hukawng Valley. He said "we were ordered to move up to a hilltop hamlet called Nhpum Ga. The enemy surrounded us and the siege of Nhpum Ga began. One night I crawled behind enemy lines and overheard enemy plans to attack Lt. Edward A. McLogan’s area at dawn.

"Luckily, I understood the provincial dialect (Fukuoka) they were speaking. I returned and reported what I had overheard to our commanding officer, who ordered the relocation of our positions further up the hill and the booby trapping of our empty foxholes. As expected, the enemy made an all out assault up the hill at dawn. We held our fire until the enemy charged into the line of our booby-trapped foxholes. We then opened with some fifty automatic weapons as well as carbines and hand grenades.

"Seeing what had happened to the first wave, the second wave of enemy troops hesitated in confusion and appeared to be in a retreat mode. At that moment, I stood up and, in Japanese, gave the order to attack. The troops obeyed my order and they were mowed down. Thus, we were able to break the siege." \

Sgt. Warren T. Ventura of Moreno Valley, California, who witnessed Matsumoto’s actions, said "In the pitched battle … one sergeant of Japanese ancestry made the all important outstanding contribution which I am convinced saved the lives of every man (600) who survived the long tenacious defense of Nhpum Ga … Matsumoto fully exposed himself calling out to the Japanese as if he were a Japanese officer and ordered them to attack. No other man in our battalion exposed himself. That Matsumoto survived was and is a miracle".

Matsumoto’s incredible exploits were incorporated in the 1962 Warner Brothers movie, "Merrill’s Marauders." Unfortunately, in the movie Matsumoto was not identified by name or his special background revealed. The victory at Nhpum Ga also allowed Matsumoto’s battalion to advance to Myitkyina and after four months of bitter fighting the enemy capitulated. With war material now flowing freely to the Nationalist Chinese forces through the all weather airport and the Burma Road, the back of Japanese resistance in Burma was broken.

When the Merrill’s Marauders disbanded in August 1944, Matsumoto entered the hospital to receive treatment for his shrapnel wounds and subsequently served in various assignments in New Delhi. At the end of December 1944 he was sent to China where he joined Detachment 202 Office of Strategic Services (OSS) as an intelligence specialist and was seconded to the Nationalist Chinese Army guerrilla forces that operated at Kwansi Province, near the Indochina border. Again working behind enemy lines, the OSS mission was to disrupt and harass Japanese military activities. After the war was over he interviewed Japanese prisoners awaiting trial for war crimes and escorted them to Sugamo prison in Japan. Matsumoto remained in the Army until 1963 when he retired.

In addition to this Green Beret recognition, Matsumoto had previously been recognized by his induction into the Ranger Hall of Fame, Fort Benning, Georgia on July 19, 1993 for "demonstrated valor, selfless service, and … which distinguished him as one of the most extraordinary Rangers in our Nation’s history.". His name is among 14 listed on the Ranger Memorial, the plaque of which reads, "A grateful nation dedicates this plaque to Americans of Japanese descent for service above and beyond the call of duty".

On October 23, 1993 Matsumoto received the American Patriot Award from his peers in the Japanese American Veterans Association, then an MIS organization. In July 1994, he was inducted as a "distinguished member" into the 75th Ranger Regiment, an element of which is now fighting in Iraq. In 1995 the Burmese government presented its Medal of Freedom and a Burmese green beret to Matsumoto. On June 27, 1997, he was inducted into the MIS Hall of Fame at Fort Huachuca, Arizona. In addition to the Legion of Merit, he was awarded the coveted Combat Infantryman’s Badge, two Distinguished Unit Citation ribbons, five Bronze Star Medals (some with "V" devices) and other decorations and citations.