Washington, D.C. The Japanese American Veterans Association participated in two major events in the Nation’s Capital on Memorial Day, May 29, 2006. First, JAVA was represented at the Arlington Cemetery Amphitheater Memorial Day program by three persons: President Bert Mizusawa who was in the audience and two color bearers, Mike Yaguchi who carried the US flag and Grant Hirabayashi who carried the JAVA colors. JAVA was among the 20 Veterans Service Organizations that represented color bearers for the event. Defense Secretary Rumsfeld “urged the audience members to renew their resolve against US enemies and to count the country's many soldiers as blessing". President Bush said: "We are reminded why America has always gone to war reluctantly, because we know the costs of war. We have seen those costs in the war on terror we fight today."

Following the Arlington Program that ended at noon, the JAVA members joined its contingent in the National Memorial Day Parade down Constitution Avenue in Washington, D.C. JAVA's contingent of 19, made up of Vietnamese American, Chinese American, Korean American, Japanese American and Caucasian, marched smartly to the cadence of MAJ Sharon Wu Nitsche. The two events, conducted for the first time, provided visibility to Asian Americans in the armed forces and name recognition for JAVA. BG Mizusawa and Colonel Sunao Phil and Mrs. Ishio were invited to sit on the Reviewing Stand.

A large GO FOR BROKE sign carried by Michael Yaguchi and Akira Yoshida led the JAVA contingent followed by the color bearers John Kiyonaga who carried the American flag, Floyd Mori, who carried the JAVA color and Chosei Kuge who carried the 442nd color with battle streamers, borrowed from Senator Daniel Inouye's office. Kuge said: “I had the honor and privilege of carrying the 442nd RCT flag. Since most 442nd veterans in this area are over 80, I hoped they wouldn’t mind a youngster of 76 from the Korean War carrying the color for them. I know that brother Thomas who was KIA on April 22, 1945 as a member of K Company and brother Toshi who was in the 442nd medics from Camp Shelby till the end of the war (now deceased) .would have been proud that their younger brother carried the flag. When we passed the reviewing stand, all those up there stood and cheered or saluted, including Colonel Phil Ishio, USAR Ret, Brig. Gen. Bert Mizusawa and GEN Peter Pace who is Chairman, Joint Chiefs of Staff. 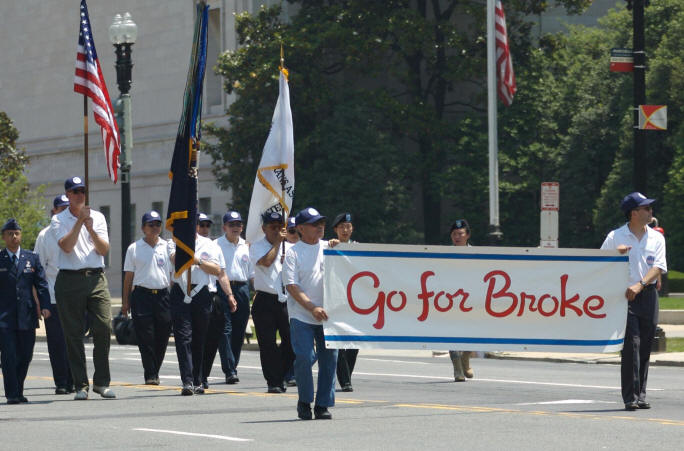 JAVA President BG Mizusawa said he was proud of the JAVA contingent and said he was interviewed by the Pentagon channel (live) immediately after the JAVA contingent passed the reviewing stand located between 7th and 9th Streets. JAVA Vice President Colonel Thomas V. Mukai said the applause and recognition of Japanese Americans from the on-lookers from the sidelines were gratifying. He said MAJ Nietsche and CPTs Kay Wakatake and Tino Dinh, active duty personnel in uniforms, were “truly great assets”.

Sixty years ago in July 1946, President Harry S. Truman reviewed the 442nd RCT at the Ellipse, following their march down Constitution Avenue, the same path the JAVA contingent marched on. This was reportedly the first time a US President reviewed troops of regimental size. The President’s words and his presence, probably more than anything else, have contributed to the defeat of prejudice and discrimination and have greatly leveled the “playing field” for Asian Americans in all future career endeavors, including the military 30