Washington, D.C.  Captain Martin Joseph Higgins, 90, and his wife, Marjorie, who died on October 1, 1997, were buried at the Arlington National Cemetery on May 15, 2007 with full military honors.  Higgins passed away on February 26, 2007.  Three veterans of the 442nd Regimental Combat Team representing the Japanese American Veterans Association and two representatives of the 36th Division participated in the funeral program.  The 442nd Veterans Club Hawaii sent a box of red anthuriums which were displayed at the chapel and at the gravesite.  The 442nd representatives were Joe Ichiuji, Kelly Kuwayama and Terry Shima.   The 36th Division representatives were CPT Edgardo Limbo, USANG, and 1SG John F. Sampa, TXARNG. 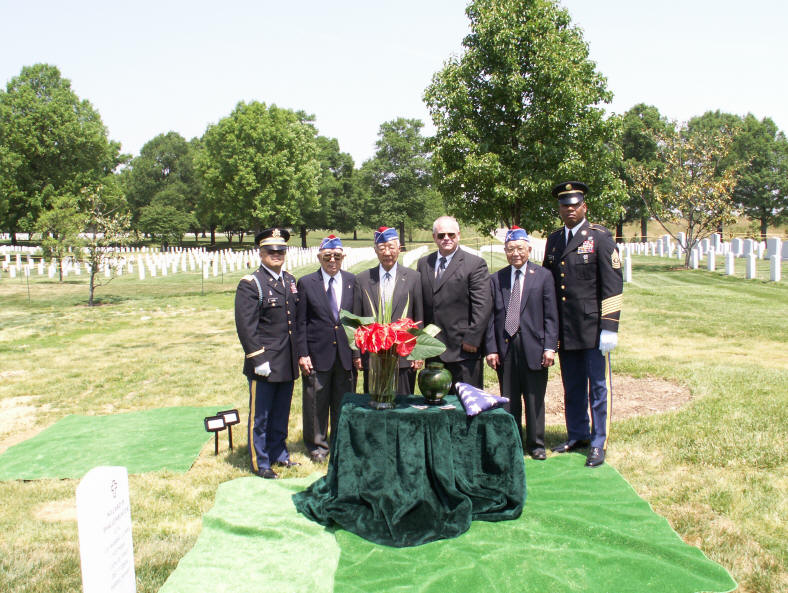 Higgins’ contact with Japanese Americans began on a fateful day, October 31, 1944, when elements of the 1st Battalion, 141st Regiment of the 36th (Texas) Division, were rescued by the 442nd Regimental Combat Team (RCT), a segregated Japanese American unit, which included the 100th Infantry Battalion.  Higgins was selected by his peers to command 278 men, who had been encircled by German forces in the Vosges forests of eastern France and was being annihilated.  After both the 2nd and 3rd Battalions of the 141st regiment failed to break through the enemy’s iron circle, the 442nd RCT was assigned the tough job.  The 442nd pierced the German stranglehold after fighting for five days and nights and sustaining casualties two to three times the number of the 211 soldiers left to be saved in the 141st.   This rescue operation was subsequently characterized by the US Army as one of the ten most fiercely fought battles in US Army history.

From that day onward, Higgins was a steadfast friend of his Nisei rescuers speaking on their behalf at every opportunity to contribute to the breakdown of prejudice and discrimination.  He also supported the passage of legislation which provided citizenship for the Issei, the first generation Japanese residents in the US..   He was invited to various Nisei veterans reunions, where he paid his respects to the rescuers both living and the fallen.  He used his personal funds to visit schools to educate them on nationalism and the bravery of the Nisei.

Full military funeral for Higgins contained the following elements: service at the Fort Meyer chapel, a  horse drawn caisson, caparisoned (rider-less) horse, a color guard, an escort platoon., a military band, a military chaplain, three rifle volleys by seven soldiers, military bugler, the formal folding of the flag, and the presentation of the flag to a member of the family. 30