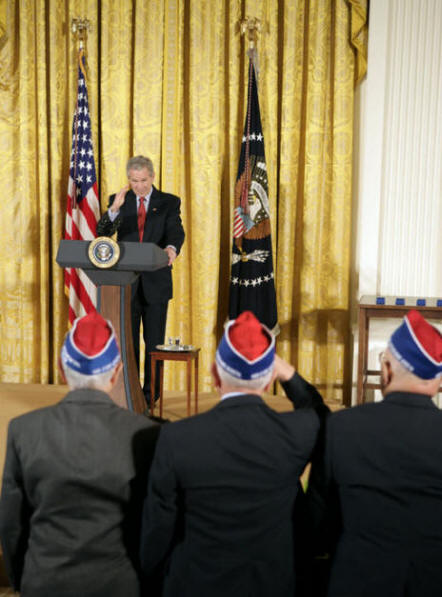 Washington, D.C. Two years ago, on May 29, 2004, President George W. Bush, opened the WW II Memorial located at the National Mall in Washington, D.C. He said in his keynote address that the entire nation galvanized –from war plants to victory gardens - in the struggle to preserve democracy. He said that men and women from all walks of life served in every phase of the war effort and that “America gained strength because African-Americans and Japanese-Americans and others fought for their country, which wasn't always fair to them.”

The President cited a Japanese American, George Joe Sakato of Denver, Colorado, an infantryman of Co. E, 442nd Regimental Combat Team, as an example of courage. The President said: “The ranks were filled with men like Army Pvt. Joe Sakato. In heavy fighting in France, he saw a good friend killed, and charged up a hill, determined to shoot the ones who did it. Pvt. Sakato ran straight into enemy fire, killing 12, wounding two, capturing four, and inspiring his whole unit to take the hill and destroy the enemy. Looking back on it 55 years later, Joe Sakato said, "I'm not a hero. Nowadays, they call what I did road rage." This man's conduct that day gained him the Medal of Honor, one of 464 awarded for actions in World War II.”

More recently, on April 12, 2006 President Bush led a panel discussion on Medicare at the Northern Virginia Community College in Vienna, Virginia. One of the five panel members was Bob Nakamoto, Chairman of Base Technologies and a member of the Japanese American Veterans Association. The President told the audience, which consisted of Nisei war veterans from JAVA, “I particularly want to thank the veterans who are here with us today. We have been joined by a special group of people, the veterans from the 442nd Regimental Combat Team. By the way, Senator Inouye, of Hawaii, was a member of that very important regimental combat team, and I want to thank you all for being here today and thanks for serving our country. Welcome.”

One month later, on May 12, fourteen JAVA members of various Asian American ethnic background, were invited to the White House to attend the Asia Pacific American Heritage Month celebration. In his address at the historic East Room the President, who used the occasion to present awards to five Asian Americans, said in his welcoming remarks: “I want to thank the members of the 442nd Regimental Combat Team who are here today. Thank you all for coming. God bless you.” At this moment, JAVA's 442nd veterans spontaneously stood at attention and saluted their Commander in Chief and he returned the salute. The President continued: “Veterans who have set such a fine example for those who wear the uniform today. And I would like to welcome the men and women in uniform who have joined us today. Thank you all for being here. Thank you for your service.” Yeiichi Kelly Kuwayama, highly decorated 442nd RCT combat medic, reflected the views of the other 442 veterans when he said “We accepted the President’s salute on behalf of all Asian American veterans who have served in the armed forces.” 30