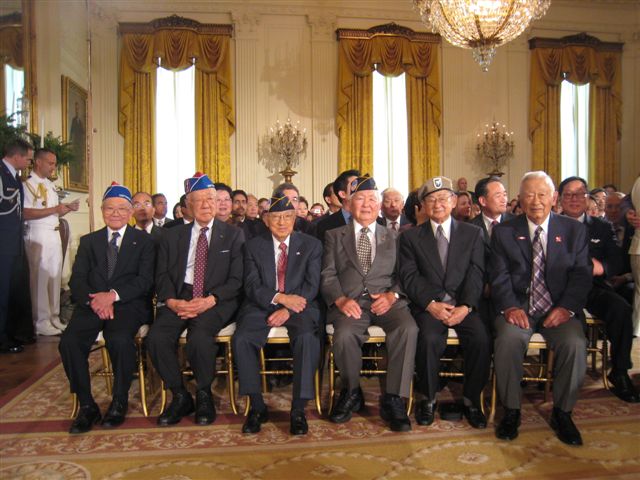 The Commander in Chief was warm in his praise of the Japanese American veterans.  After thanking Secretary of Labor Elaine Chow, former Secretary of Transportation Norman Mineta, the President’s Advisory Committee on Asian Americans, and foreign dignitaries of the diplomatic corps for their presence, he thanked the “WW II veterans and Japanese American veterans who have joined us today.  We are proud to have you here and thanks for the great example you’ve set for those who wear the uniform.  We’re really glad you are here.” The six Nisei veterans on the front row stood up, smartly saluted their commander in chief, as he returned the salute.

Kuroki, who received his invitation separately from the White House, traveled to this event from California. He was accompanied by daughter Julie Kuroki Cooney.  Kuroki said  “I was delighted and surprised to be invited by the White House for the Asian Pacific American program for the second time in two years.  To receive recognition…so many decades later was truly incredible - an awesome honor rarely accorded to few Americans.  This time I was honored to be seated with five other Nisei veterans in the first row.  I had to fight like hell for the right to fight for my country and I now feel full vindication.”

In addition to recognizing the APA veterans, President Bush presented the nation’s highest honor for community service, the President's Volunteer Service Award, to six Asian Pacific Americans.  The honorees were Adeel Khan, a Virginia Polytechnic and State University student government president, for bringing the campus together after the terrible violence hit the campus;  Angela An, Peace Corps volunteer for her teaching role in a remote mountain town of  Bulgaria; Anna DeSanctis for educational and relief work in China; Kay Hiramine, for organizing a group that provides humanitarian aid to 60 nations;  Linda Uehara, for promoting healthy lifestyles to youths in Hawaii;  and Jonathan Wu, for recruiting high school honor students to work with elementary school students on advanced science projects.