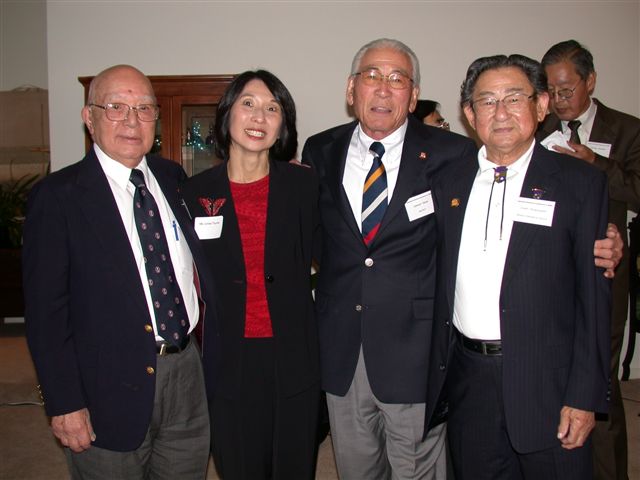 Participating JAVA members included Mr. Grant Hirabayashi, Military Intelligence Service and Merrill’s Marauders; Mr. Joe Ichiuji, 522nd Field Artillery Battalion; Dr. Susumu Ito, 522nd F.A. Battalion; Mr. Marty Higgins, Commander of the trapped battalion of the 36th (Texas) Division ; and Mr. Lawson Sakai, 442nd Regimental Combat Team. Each veteran was presented a plaque as a symbol of appreciation for the Nisei men in the armed forces and gave his personal account of his experience. Ms Sandra Tanamachi, one of the organizers of the event, said "it was truly a moving and emotional experience for everyone fortunate enough to be in attendance."

During World War II, Higgins, (89) of Anna Maria, Florida, was the selected commander of a battalion of the 141st Regiment (Texas) which were trapped in the Vosges Mountains of eastern France and that was rescued by the 100 Battalion and the 442nd Regimental Combat Team. In recognition of his Nisei rescuers, he said: "I am not sure if I could have done what you did. To volunteer to fight for the country that took away your constitutional rights … in my lifetime, no other group was ever persecuted as badly as you were."

Sakai, (81) of Gilroy, California Co. E, 442nd R.C.T. said "in 1941, we were the enemy and after the rescue of the "lost battalion," we were the heroes. Our mission was to prove our loyalty. General Eric Shinseki, a sansei, third generation Japanese American, (has since risen) to the position of Chief of Staff of the U.S. Army. I believe we can say our mission was accomplished."

In this connection, Thomas Kuwahara (57), a sansei of Lafayette, Louisiana, who attended the Houston event, commented: "Because of the outstanding military record of the Niseis, second generation Japanese Americans, who proved their loyalty, I am another beneficiary of their sacrifice. My generation was given opportunities that were denied to the Niseis. I was a helicopter pilot, warrant officer, and Master Aviator for the US Army."  This was unthinkable for the Niseis with pilots license who wanted to serve in the Army Air Corps in WW II.   The Niseis further leveled the playing field for us to compete.

Ito, (85) of Wellesley, Massachusetts, professor emeritus of Harvard Medical School, was the forward artillery observer assigned to Co. I, 442nd R.C.T. which sustained the heaviest casualties in the rescue of the "Lost Battalion". He witnessed and took pictures of numerous Jewish prisoners of Dachau death camp as they headed south.

Ichiuji (86), 522nd Field Artillery Battalion of the 442nd RCT, recalled "we were the only Japanese Americans to fight in Germany and we were one of the first Allied Forces to liberate the Jews from the subcamp of Dachau concentration camp in late April 1945. When I saw the temporary barracks and barbed wire fences, it reminded me of the Poston camp from which I volunteered. It is ironic that many of us who came from the relocation camps in the US would come to Germany to help release the Jewish victims. While the scope and purpose of the Japanese Americans and the Jews were different, the reason for incarceration was the same: racial discrimination. Notwithstanding, this is a great nation: a nation that acknowledged its mistakes and publicly apologized for it.

Hirabayashi (85), was one of the 14 Japanese Americans to serve in the 3,000 strong Merrill’s Marauders, the forerunner of the US Special Forces, in the leech, disease and malaria infested jungles of Burma. Their mission was to penetrate the enemy lines, eavesdrop on Japanese communications, and to serve in combat to defeat the heavily outnumbered Japanese forces and to capture the town of Myitkyina, thus facilitating the free flow of war material to the Chinese Nationalist forces. Hirabayashi volunteered for this "dangerous and hazardous duty" to prove Japanese American loyalty to the Flag. He was recently inducted into the Ranger Hall of Fame at Fort Benning, GA.

Other portions of the day’s program consisted of speeches on the internment of 120,000 Japanese American in 10 armed camps in desolate areas of the United States, the passage of legislation that offered public apology and a token payment of $20,000 to each surviving internee.

It also included a visit to the Holocaust Museum that featured the liberation of Jewish inmates by the 522nd F.A. Battalion and the African American 761st Tank Battalion. Ironically, both were ethnic groups that experienced its own prejudice at home.

The Japanese Consul General and Mrs. Yoshi Kamo held a reception at their residence to climax the events. In his remarks, the Consul General praised the heroism and assimilation of the Japanese Americans, concluding: "They have become true Americans by transcending ethnicity and have been nurtured by their past experiences. Japanese Americans ascribe to the same characteristics that any nation values and admires: diligence, decency and tolerance to name a few." The 442nd veterans were introduced to Mrs. Nellie Connally, widow of former Texas Governor John Connally, who, on October 21, 1963 signed a proclamation that accorded honorary Texas citizenship to all 442nd members. The veterans thanked Mrs. Connally on behalf of their fellow comrades for this coveted recognition. 30