Nashville, Tennessee. After 10 months of combat duty in Iraq, Sergeant Robert S. Nakamoto, a member of 278th Regimental Combat Team of the Tennessee National Guard, a part of the 4,000 strong unit of Tennessee men and women stationed in southwest Asia, returned in October 2005 to their home state, where he has since been undergoing medical treatment sustained in the line of duty. Sgt. Nakamoto was asked by the Japanese American Veterans Association to share his Iraq experience. Nakamoto obliged saying, “During the deployment, I frequently thought about the example of exemplary service that the Nisei had set for our nation. I tried to live up in my own small way to the heritage the Nisei gave to our nation. I am a fourth generation Japanese-American. My dad served in the Korean War. 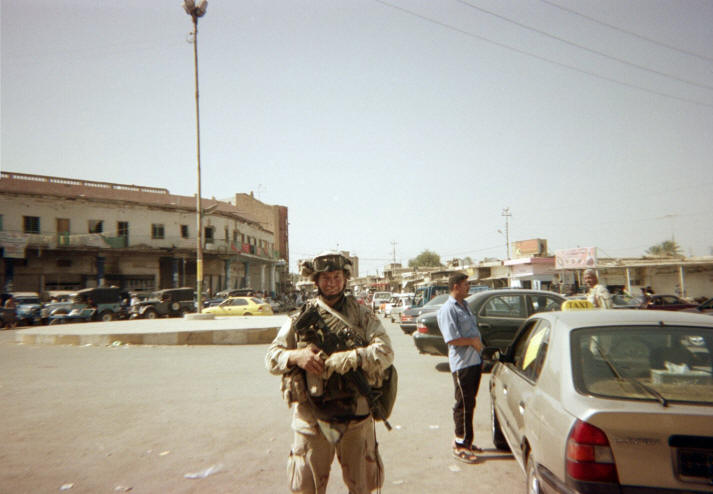 “The 278 RCT arrived in Iraq in December 2004. While in Iraq I served primarily as a .50 cal. gunner on a Hummer in a scout platoon. I would occasionally serve as a vehicle commander or driver. I also served part of the time as a remote control airplane operator. This surveillance drone was a great addition to our unit, and it was a real asset to our unit's safety. It was small enough that we could carry the system in our vehicle and launch it while on patrol or from the base.

”A good portion of my time was spent serving with an Air Force Explosive Ordnance Disposal (EOD) team and their Texas Engineer security escort. The Texas Guardsmen I served with were with the 36th Infantry Division. This was another coincidence because the 442nd Regimental Combat Team had served under the 36th (Texas) Infantry Division in WWII. [Editor’s note: The 442nd RCT was attached to the 36th from September 29 to November 17, 1944 in Eastern France, where the 442nd rescued the trapped 1st Battalion, 141st Regiment, 36th Division, in one of the ten most fiercely fought battles in US Army history.] I went on around five or so patrols every week while in Iraq.

“We did get shot at a fair amount in Iraq. However, it wasn't ever a "barrage" but a steady, if slow, stream of shells or rockets or explosions every now and then. However, during the year we were there our entire squadron (a cavalry term for a battalion sized unit) probably had less things shot at us then some of you in the 442nd may have encountered in 30 minutes in WWII. God truly blessed our unit. No one at our base was killed or seriously injured. We had some light wounds among our unit, but nothing too serious.

”One highlight of my Iraq tour was the Charlie Daniels Band visiting us in September 2005 at our remote base in northeast Iraq. A group of us set up the sound system for Charlie Daniels and his band, who journeyed to our base despite risks to their personal safety. Several soldiers in our unit lent their personal music equipment and we were able to patch it together to make a functioning PA system. Charlie's band members said it was the best set-up they had had in Iraq. [Editor’s note: Daniels, country music legend, took his band on this tour to Kyrgystan, Uzbekistan, Afghanistan, Kuwait, Iraq and Germany. They traveled more than 16,000 miles, performed three shows per day for American troops deployed in the war on terrorism.] 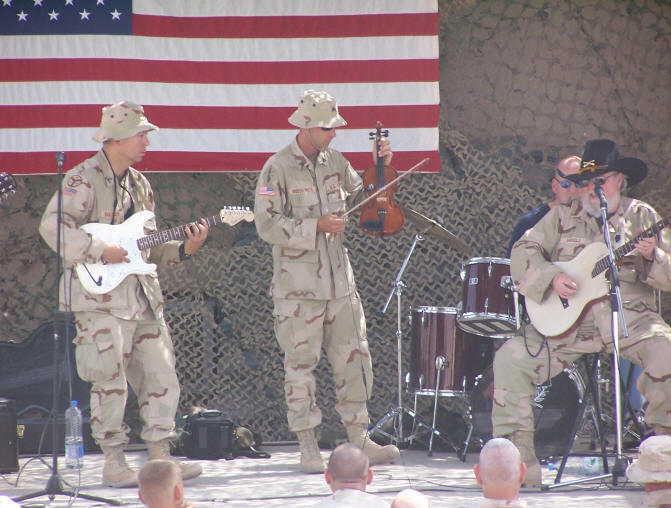 ”The soldiers thought the world of Charlie Daniels, with his entire band and support staff, for making the hard, and potentially dangerous trek to our base. We were on the outskirts of Iraq, so it wasn't an easy trip. They gave a performance worthy of any U.S. concert I've ever seen. Charlie's words of encouragement, and his band's members words, were also greatly appreciated. One highlight was they did a really great rendition of Amazing Grace, plus many of his classic hits. I got to play on one song with them and did some guitar solos in the song. I was thankful to get some compliments on my guitar playing (fortunately it was an easy song). It was a great honor to play with someone of Charlie Daniel’s stature.

”We left Iraq in October 2005. Due to medical problems I had had with the anthrax vaccinations I received in 2004, plus a subsequent fall on an obstacle course while training, and headaches from an explosion near our vehicle in Iraq, I stayed on active duty to receive medical treatment prior to being released. I had chosen to delay getting medical treatment until I got back from Iraq. Like many things in life, getting better has taken longer then I thought it would. I'm hoping to leave active duty this summer and return to my job at the Tennessee state government where I am an Environmental Protection Specialist .

”The Iraqi people are at a crossroads. There is a great amount of potential in that nation to do well. There is also the potential for things to not turn out as well as we would like The Iraqi people have great food, music, dance, art, and are good at building, farming, mechanics, and business. Many of the people we encountered were very pro-U.S. One Iraqi citizen personally saved the lives of some of our men. Many of the Iraqi military and police units we worked with were first class units. In our area, they actually would do many of the difficult portions of the missions. In our area, no Iraqi units fled. Instead, they would slug it out with the enemy. Many of the Iraqis in our area were Kurdish, and the Kurds have a rich military heritage.

”I have been asked, “Why did I rejoin the US Army as an enlisted man,” when I left its ranks honorably in 1987 as a Captain. The answer is simple. Like nearly all Americans, the events of September 11, 2001 were a great shock. It was very sad to see such a display of hatred directed against civilians. It was also very sad to think of the number of innocent victims who were killed or injured or had loved ones hurt in that tragedy. As a sense of duty to avenge the indiscriminate killings by international terrorists and to make our country safe from international terrorism, I joined the Tennessee Guard in July 2002. I did this despite the fact that I have five children and, due to a technicality, had to take a cut in rank from Captain to the enlisted ranks. I felt I had to serve and my wife and family supported me.

“I graduated from the United States Military Academy at West Point in 1982 following which I served five years as an infantry officer, primarily with the 82nd Airborne Division and earned the Ranger Tab, Senior Parachutist Wings, and Expert Infantry Badge. I resigned from the Army in 1987. As a result of leaving my name on the reserve rolls while I was in inactive status, I lost my commission in 1995

”Coming back in the military after being out for 17 years was a bit of a "Rip Van Winkle" experience. The gas mask, radios, vehicles, and weapons had all changed. The military was now using global positioning navigation devices, computers, e-mail, modernized night vision gear, etc. I went to my first two drills in civilian clothes due to not having a uniform anymore, while I waited for my new uniforms. Many of the men I was serving with were young enough to be my son.”

Sgt Nakamoto has lived in Nashville, Tennessee since 1992 because of his love for folk music, which some call country music. He also plays Christian music as a hobby. He is the son of Robert Nakamoto, Chairman of Base Technologies, Inc., of McLean, Virginia. Sgt. Nakamoto plans to attend the JAVA quarterly lunch on July 29 at which time he will discuss his Iraq experiences and entertain guests with his guitar and music he wrote.
30