Washington, DC. The 11th Annual Cherry Blossom Freedom Walk, a major event at the National Cherry Blossom Festival, was held on March 28, 2009, at the National Japanese American Memorial to Patriotism in Washington, DC.  Over 200 participants, including Japanese Ambassador Ichiro and Mrs. Fujisaki and former Secretary of Transportation Norman Mineta participated.  The Freedom Walk is sponsored annually by NJAMF and the Japanese American Veterans Association. 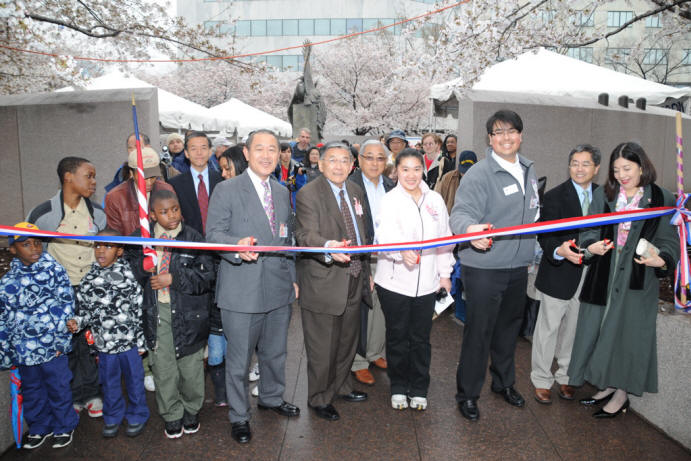 In his brief extemporaneous remarks, Ambassador Fujisaki said: “I came to this monument right after my arrival in Washington. I read all the inscriptions. They were so moving. I respect the Japanese Americans who had fought bravely in the war. They had Japanese blood and American spirit. It was tragic that the Japanese Americans endured internment during World War II.  However, twenty years ago the American government, under President Reagan, acknowledged this wrongdoing and extended an apology. I think that this deed is very important and merits attention. As His Majesty, the Emperor, mentioned to Nisei Major Kan Tagami, former aide to General Douglas MacArthur, following their private meeting at the Imperial Palace in 1946, I hope the Japanese Americans will continue to be the bridge between two great nations.”

Secretary Mineta said it is fitting that we meet annually at the Memorial to remind us that what happened to one ethnic race must never occur again in America.

Ms. Youngberg said that the Smithsonian exhibit “A More Perfect Union,” which was on display for 16 years (1987 to 2005) is being redesigned and will reappear in the newly refurbished Museum of American History.  “Whatever its final design, it will reflect A More Perfect Union’s objective that the wartime experience of Japanese Americans be a lesson for all Americans.  Japanese Americans demonstrated the importance of courage in adversity, loyalty to the highest ideals of the U.S. Constitution, and the ability of determined citizens to effectuate positive change.  Through their struggle to ensure that all Americans understand the importance of extending the safeguards and protections of the Constitution to every citizen, they have moved all of us a bit closer to that "More Perfect Union" envisioned by the founders of the nation,” Youngberg said.

Following the program Ambassador and Mrs. Fujisaki, Secretary Mineta and other dignitaries cut the ribbon to start the one mile walk around the Mall amidst the beautiful cherry blossoms in full bloom.

Other participants of the event were the Nen Daiko (Japanese drummers), the Seabrook Minyo (folk) dancers, and the Hurriyet (freedom) Dabkeh Troupe, traditional Palestinian dancers.

The chair of the Freedom Walk Committee was Dr. Karen Matsuoka.  The Master of Ceremonies was Dr. Craig Uchida, Chairman of the Board, NJAMF. 30