Washington, D.C.  The ninth annual National Japanese American Memorial Foundation (NJAMF) 2007 Awards Dinner Gala was celebrated by approximately 330 persons on April 20, 2007 at the J.W. Marriott Hotel in Washington D.C.  The Chairman’s Award was presented posthumously to the late US Senator Spark Matsunaga, the Patriotism Award to US Senator Daniel K. Akaka of Hawaii, and the the Preservation of Constitutional Rights Award to US Senator Lindsey O. Graham of South Carolina.

NJAMF was responsible for the construction of the Memorial to Patriotism, located one block from the US Capitol Building, in November 2000.  The Memorial represents three important events: the abrogation of the denial of civil rights to a segment of the American population, the heroic and patriotic response of those same Americans, and a precedent setting government apology.  As the Presidential Commission on Wartime Relocation and Internment of Civilians concluded, the internment was not caused by military necessity but by radial prejudice, war hysteria, and the failure of the political leadership to guarantee the civil rights of its citizens.  Twenty thousand supporters donated funds to the NJAMF to build the Memorial administered by the National Park Service.

The Chairman’s Award was presented posthumously to Senator Matsunaga for raising the nation’s awareness of Japanese American community’s contributions to the nation.  Matt Matsunaga, the late Senator’s son, accepted the award. 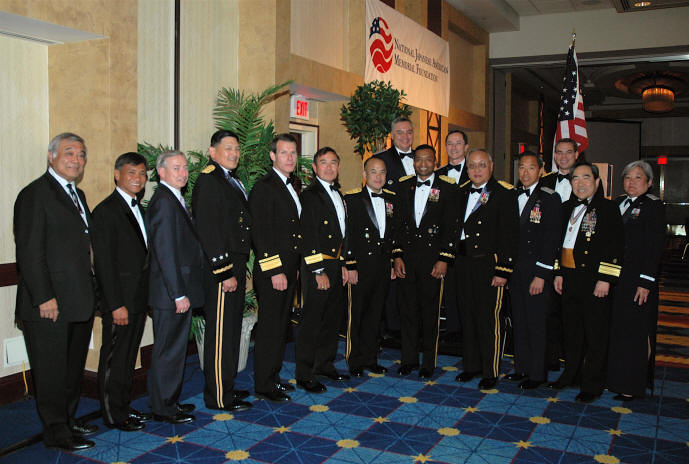 Senator Graham, an attorney, was recognized for his lead role in the US Congress that this is a nation of laws and justice.  The effects of his influence can be seen in the immigration bill, the interrogation and prosecution of terrorist suspects, and the incarceration of terrorists.

Senator Akaka’s award epitomizes his life of giving to his government and his people.  Veterans, reservists, National Guardsmen, and active duty personnel have benefited from his role in the Senate Committee on Veterans Affairs.  His leadership in other committees has benefited other segments of the population.   Senator Daniel K. Inouye of Hawaii said the Award “recognizes Senator Akaka for his unwavering patriotic spirit and loyal devotion to our country’s security and welfare.” 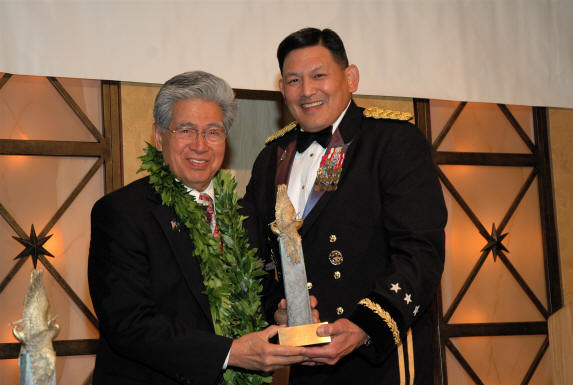 NJAMF paid special tribute to Japanese Americans  who served in the Korean War, during which 246 made the supreme sacrifice.  Gene Takahashi of Westport, CT received the recognition on behalf of Korean War veterans.  Takahashi was a platoon leader whose Love Company was overrun by Chinese forces when they entered the war at the Yalu River.  He was captured along with his M/Sgt, escaping by jumping the guards at a planned signal.  At one point he donned a discarded Korean straw hat and coat and shuffled along  with Korean refugees in their trek south.   The 2nd Division regrouped in Seoul.  Love Co. suffered over 95% casualties and Takahashi was the only line officer left.

Replacements arrived, were trained, and the offensive resumed.  After 6 months of front line duty Takahashi was hit by Chinese machine gun fire.  Medics could not rescue him due to heavy fire.  He saved his life by applying a tourniquet that he learned as a Boy Scout.  Takahashi said he was greatly honored to be selected as the Korean War representative to receive this recognition.  He added, "We have come a long way to prove our patriotism to our country.  And we must never forget the moral values that we learned from our Issei parents."

Of  75 Asian American generals and admirals, 14 of them attended the dinner. Four were from Hawaii.  The Master of Ceremonies was Frank Buckley, anchor of KTLA Prime News.

The chair for this year’s event was Eric Y. Nishizawa, Esq.  Dr. Raymond S. Murakami is the Chairman of the NJAMF Board of Directors, and Gerald Yamada, Esq, is President and Executive Director of NJAMF.  30