Washington, DC. The 2010 National Cherry Blossom Festival in Washington D.C. proved to be one of the best ever for the Japanese American Veterans Association (JAVA) when it came to member participation, crowd appreciation and book distribution.  The only things missing on Saturday, April 10, were the cherry blossoms themselves.   This year the colorful blossoms, an annual spring highlight in the nation’s capital, were mostly gone by the festival weekend due to unusual 90 degree weather which prevailed several days during the preceding the week. The lack of the blossoms, however, was more than made up for by the mild sun-shiny day for this year’s event with crowds on the streets closed off of Pennsylvania Avenue and 12th Street NW only blocks from the White House from morning hours until dinner time.

The JAVA booth, provided free of charge by the Japan America Society of Washington (JASW), D.C, was part of the Sakura Matsuri, Japanese Street Festival organized by JASW, the largest one day exhibition of Japanese culture in the US stretching six blocks in downtown Washington and attracting over 160,000 in just one day.  Ambassador John R. Malott is President and CEO of JASW.   Compliments came from a constant flow of well-wishers - from fellow veterans of America’s many conflicts from World War II on, and other visitors - often with families, who flock to the capital during the spring season.  Approximately 68 copies of AMERICAN PATRIOTS, the MIS in the War Against Japan, compiled by Dr. Warren Tsuneishi and Dr. Stanley L. Falk, a graduate in Japanese at the War Department’s Military Intelligence Service Language School were distributed as were some 33 JAVA commemorative coins. 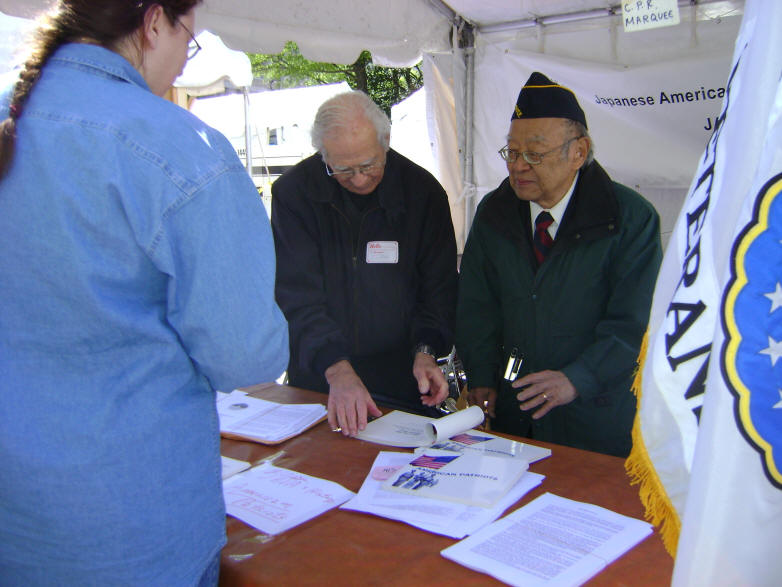 Tsuneishi, a veteran with the U.S. Army in the Pacific during World War II, was chairman of  JAVA’s liaison committee with the JASW this year and Captain Reuben Yoshikawa, a U.S. Air Force veteran, will lead the committee next year.  In addition to Tsuneishi, Yoshikawa and Falk, many other veterans shared in greeting and informing visitors on the part played by Nissei, Sansei in World War II. Yeiichi (Kelly) Kuwayama was awarded the Silver Star and Purple Heart winner for action in Europe during World War II with the 442nd Regimental Combat Team.  Ranger Grant Hirabayashi was a member of Merrill’s Marauders, a World War II special forces unit which operated behind enemy lines in Burma. Dr. Ray Murakami served in the U.S. Occupation of Japan.  Chosei Kuge served with the 40th Infantry Division in Korea from 1950 to 1953. Lieutenant Colonel Mark Nakagawa, a career Army officer who served in various posts in Korea, Germany and Iraq. Grant Ichikawa was an Army Intelligence officer during World War II and the Korean War.   Lona Ichikawa, Grant’s daughter, is an Army veteran and is now a Department of Army Civilian in Iraq. Aki Konoshima served in the Occupation of Japan. Betty Taira, who served as a Department of Army civilian school teacher and principal in Japan, Okinawa, Korea and Spain, also provided valuable assistance along with Richmond Frankenberger, a high school volunteer helper and JAVA President Bob Nakamoto.  As she has done in the past, Lona donated a large number of souvenirs, with JAVA logo, for distribution to the visitors.

During the previous week, on April 3rd, the National Japanese American Memorial Foundation and JAVA cosponsored the 12th Annual Freedom Walk at the National Japanese American Memorial to Patriotism.  In a similar gorgeous spring day, amidst the gentle fluttering fall of cherry blossoms, His Excellency Ichiro Fujisaki, Ambassador of Japan, the Honorable Norman Mineta, and Washington, DC Mayor Adrian Fenty were honored for their “enduring support for the Freedom Walk”.  Dr. Craig Uchida, Chair of NJAMF, and Robert Nakamoto offered remarks of welcome to the overflowing crowd of over 300 people.   30