Washington, D.C. A rare combination of perfect spring weather, peak cherry blossoms, and a parade brought a massive number of people on Saturday, April 9, 2005 to Washington, D.C. for the Cherry Blossom Parade, the climax of the two week Cherry Blossom Festival. The Japanese American Veterans Association booth, located at 11th St and Pennsylvania Avenue near the parade route, was thronged with visitors who wanted to learn about Japanese American military contributions from the Spanish American War of 1898 to the present Gulf Wars and their internment experience. The previous week of April 2, JAVA joined the National Japanese American Memorial Foundation Freedom Walk Committee "A Salute to Patriotism" program at the Japanese American Memorial to Patriotism, located near the US Capitol. 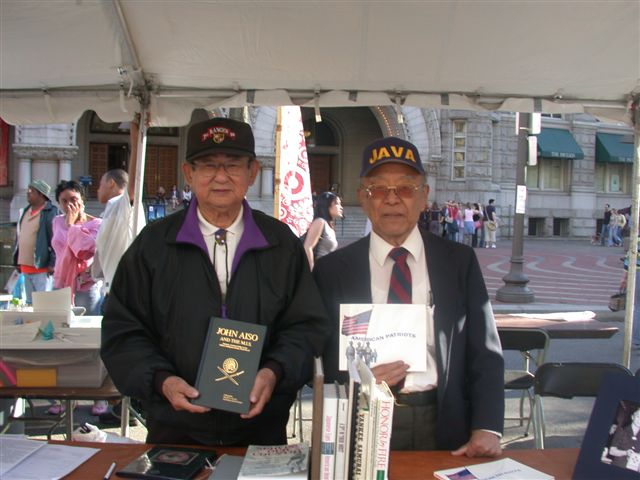 Eight of JAVA’s WW II veterans described their combat experiences in Europe and France and in the Asian-Pacific theater as well as the incarceration of 120,000 Japanese Americans in ten internment camps. The display table contained books and posters for visitors to browse. Flyers on the 100th Battalion and 442nd Regimental Combat Team, written by the 442nd Hawaii Sons and Daughters, the Military Intelligence Service, written by Dr. Stanley Falk, and JAVA were passed to interested visitors.

Visitors who were familiar with the Nisei WW II experiences thanked the veterans for their wartime role to preserve freedom. Some wanted to know how the veterans fighting in the Asian Pacific theater felt about fighting against Japan from whence their parents immigrated to America and where some of their own families and relatives lived. Their unequivocal response: we are Americans, loyal to our Flag. Others asked for bibliographies. Several extended invitations to speak at their schools and clubs.

JAVA sold over fifty copies of its book, American Patriots, the story of the Japanese Americans in the MIS. Some said they would buy them for their collection, others said they would give them to their relatives, friends in college and in the teaching profession. Some young Japanese Americans, sansei and yonsei or third and fourth generation, said they had heard about the heroism of the 100th Battalion and the 442nd Regimental Combat Team. However, they appeared surprised that the Niseis also served in the Asia Pacific theater.

The JAVA booth was located in the Origami Tent of the Japan America Society of Washington, D.C. The origami (paper folding) demonstration was headed by Marcia Mau, JAVA member and an origami artist, and Ms. Joy Aso of the Ekoji Buddhist Temple. This area was blocked off for Japanese martial arts demonstration, crafts, taiko drummers, pop singers, koto, calligraphy, doll making, origami and food. 30