Washington, D.C.  Senator Daniel K. Akaka celebrated the publication of a book on Japanese Americans who served in the Asia Pacific Theater during World War II at a Capitol Hill “roll out” on March 20, 2007.  Over 200 people, including members of Congress, officials from the Defense Department, White House, Veterans Affairs and other government agencies, diplomats from countries where Nisei served, veterans organizations, the press,  officials of Nisei veterans organizations nationwide, Military Intelligence Service (MIS) veterans,  and members of the Japanese American Veterans Association (JAVA) thronged the Senate Committee on Veterans Affairs conference  room. 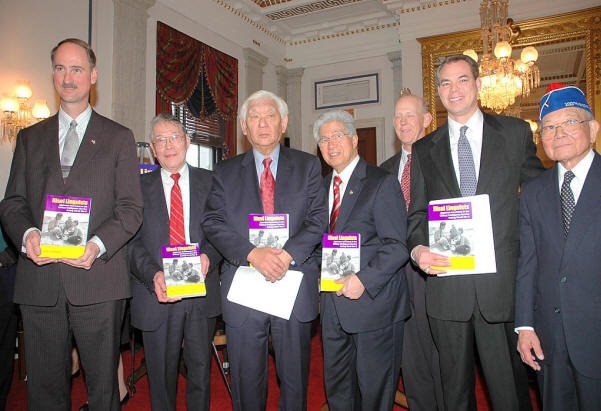 The book, Nisei Linguists:  Japanese Americans in the Military Intelligence Service During WW II, is a 514 page documentary of 3,000 Nisei who served in the Asia Pacific Theater under great secrecy.  They served in combat behind enemy lines as translators, interrogators, communication interceptors.  The author is Dr. James C. McNaughton, currently Command Historian for the European Command in Germany.  The work was printed by the Government Printing Office.

The roll out of the book was a joint endeavor of Senator Akaka’s office, the US Army Center of Military History which published the book, the US Army Office of Public Affairs, and JAVA.  The idea for the writing of the book occurred in 1994 when the JAVA President at the time, Colonel Phil Ishio, USA, (Ret), convinced Senator Akaka of the need to document the history of the Nisei service in the Asia Pacific war.  Akaka and seven other members of Congress petitioned the Secretary of the Army, who approved and assigned the US Army Center of Military History (CMH) to undertake this project. 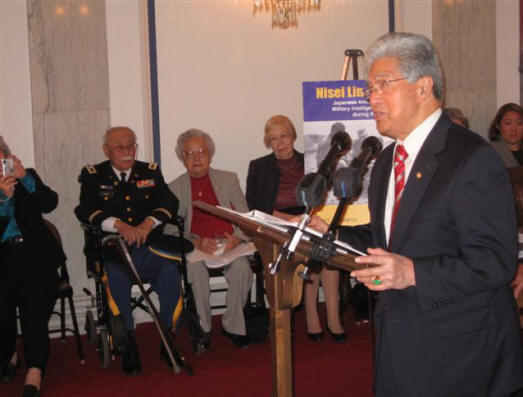 During a 45 minute program, Akaka said the Niseis’ ability to “infiltrate the psyche of our enemy through their knowledge of Japanese culture and language is credited with bringing the war in the Pacific to a quicker conclusion and later,  helping turn bitter foes into strong allies.”  Akaka also said that to the MIS soldiers and their brethrens in the 100th Infantry Battalion and the 442nd Regimental Combat Team “it was an opportunity to prove themselves as loyal American citizens.”

Senator Daniel K. Inouye regretted he could not be present due to another urgent congressional priority.  In a message,  that was read Inouye said:  “Nisei Linguists is a testament to the uncommon valor of Japanese American men who stood by their country, even when their country  -- for a time – did not.” 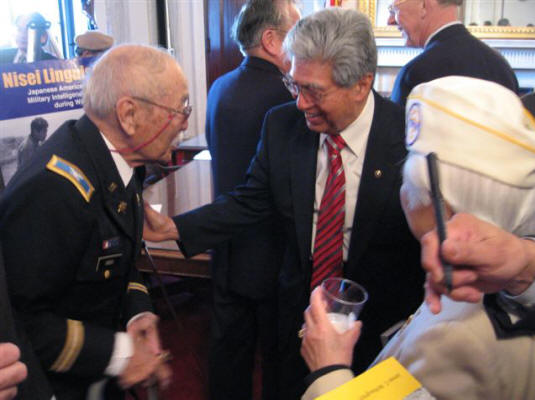 Robert Nakamoto, President of JAVA and Chairman of Base Technologies, a McLean, Virginia technology firm, presented  JAVA plaques to Senator Akaka and Dr. McNaughton in recognition of their respective roles in documenting the  Nisei contribution to the Pacific War.