Headquarters, 6th Fleet, Naples, Italy.  In view of the threat to international security posed by piracy on the African coast, Vice Admiral Harry B. Harris, Jr., USN, Commander, U.S. Sixth Fleet and Commander, Striking and Support Forces NATO was asked for his perspective.  He replied “piracy is a threat to global maritime security.  It is an international problem which demands an international solution built on partnership and collaboration.  In January 2009, the Commander, U.S. FIFTH Fleet in Bahrain, in his capacity as the commander of the Combined Maritime Forces (CMF), established Combined Task Force 151 (CTF 151) with a specific mandate to deter, disrupt and suppress piracy in the volatile Horn of Africa region.  CTF 151's counter-piracy operations have had a significant impact.  The work of U.S. Navy Lieutenant Janelle Kuroda -- a young Asian American lawyer -- and many others from coalition navies are making a real difference as we fight piracy.” [Ed Note:  VADM Harris, Japanese American, is the highest ranking Asian Pacific American serving in the US Navy.]

Aboard the USS Anzio, Horn of Africa region.  Four bells ring out over the 1MC – “Reveille, reveille, reveille.  All hands heave out and trice up.  Reveille.”  [Navy speak, 1MC is the ship’s loudspeakers. Heave out and trice up means get out of your hammocks and tie them up. Saying originally adopted when sailors used hammocks]   Another day begins in the Gulf of Aden.  I try to stretch my arms, but they hit the rack above my own and I’m reminded that I’m at sea.  The gentle rocking of the ship begs me to linger in my rack a little longer.  However, I know we’re now at the most dangerous part of the day – the pirates normally strike in the early morning.  I wash up and head to the Combat Information Center.  Moments later, the Tactical Action Officer (TAO) makes an announcement over the 1MC

“USS Anzio, this is the TAO with a situational update: we’re just received a distress call from a merchant vessel 80 nautical miles away, reporting two suspicious skiffs shadowing her.  Anzio is coming to full power and closing the position.  Now set: Counter-Piracy Condition Bravo.” [Navy speak:  Condition Bravo is a type of readiness specifically for counter-piracy for the USS ANZIO.]

The engines rev up and the ship surges forward through the sea.  My adrenaline rushes – perhaps today we will catch some pirates!  I grab my cover and head up to the bridge.  On the bridge, I am briefed by the Officer of the Deck.  It appears that the suspected pirates are about to attack a merchant vessel.  The master is following instructions to deter the suspected pirates, but he is worried about the safety of his crew, who could be held hostage for months if his vessel is successfully pirated.  I discuss the legal implications with the Task Force Commander, Rear Admiral Scott Sanders and the Commanding Officer, Captain Frank Olmo.  Another CTF 151 member, the Republic of Korea Ship (ROKS) Dae Jo Yeong, is closer to the merchant vessel and can arrive on-scene in a shorter period.  Rear Admiral Sanders directs the ROKS Dae Jo Yeong to close in on the pirates and I advise on appropriate rules of engagement.  After a successful boarding, the suspected pirates are captured and their weapons are destroyed. 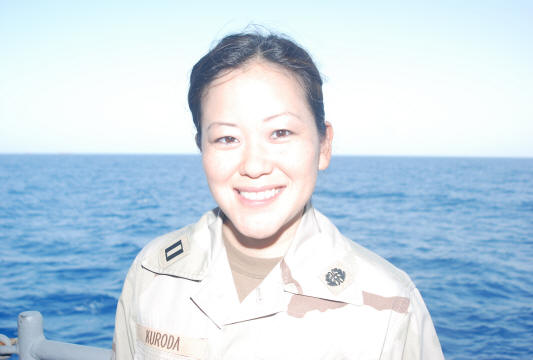 Lt. Janelle Kuroda, JAGC, U.S. Navy onboard the USS Anzio (CG-68)  at sea in the Gulf of Aden. Photo courtesy of Lt. Kuroda. 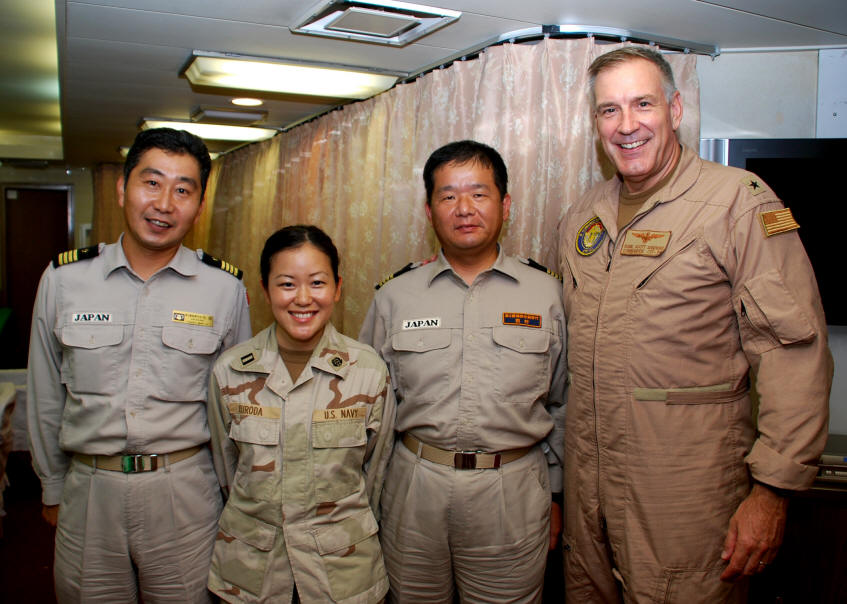 Fueled by instability in Somalia, piracy flourishes where there is little else to offer in the legitimate economy.  In response to a request for assistance from the Transitional Federal Government in Somalia, the United Nations (UN) issued several UN Security Council Resolutions that allow warships to suppress and deter piracy and armed robbery both on the high seas as well as in Somali territorial waters.  In addition to CTF 151, there are currently warships from the European Union, the North Atlantic Treaty Organization, and a variety of independent nations such as Japan, China, Russia and India combating piracy in the 1.1 square million miles of water in the Gulf of Aden and the Somali Basin.

As the CTF 151 Staff Judge Advocate, I reviewed rules of engagement and provided counsel on the implementation of counter piracy guidance to seven Coalition navies.  In order to coordinate the safety of merchant vessels, face-to-face meetings are held between Coalition vessels and independent nations to ensure the most effective use of patrol assets.  This collaboration at sea proves to be successful, as less than .001 percent of transiting ships become victims of piracy.  While the number of piracy attempts has increased over the past year, the number of successful attacks has been reduced by 40 percent over the same time.

The final four bells of the day ring out over the 1MC: “Taps, taps, lights out.  All hands turn in to your racks and maintain silence about the deck.  Taps.”  Today was a successful day in the fight against piracy, but at sea, the work never ceases and we’re back on patrol.  I’m proud to be a part of an exciting mission, sailing the seas onboard the USS Anzio, dedicated to honoring the freedom won on the Anzio beachhead by preserving the freedom of merchant vessels and their crew to safely sail the seas.

Note:   Based in Norfolk, Virginia, the USS Anzio is named after the World War II amphibious assault on the beachhead at Anzio, Italy which commenced on January 22, 1944.  Serving on the USS Anzio had a special significance to Lt Kuroda, a native of Hilo, Hawaii, because her granduncle was a member of  the 100th Infantry Battalion, the Japanese American segregated unit, which fought in key battles in Italy, including the liberation of Anzio, and France. 30