Pentagon, Washington, DC.   Major General Thomas P. Bostick, US Army, was promoted to Lieutenant General in a formal ceremony at the Pentagon auditorium on March 11, 2010.  General George W. Casey, Jr, Chief of Staff of the US Army, hosted the ceremony.  General Bostick’s wife, Renee, and son, Joshua, proudly pinned on the third star on this professional officer.

General Bostick has assumed the position of US Army Deputy Chief of Staff, G-1, responsible for developing, managing, and executing manpower and personnel plans, programs, and policies for the total Army. 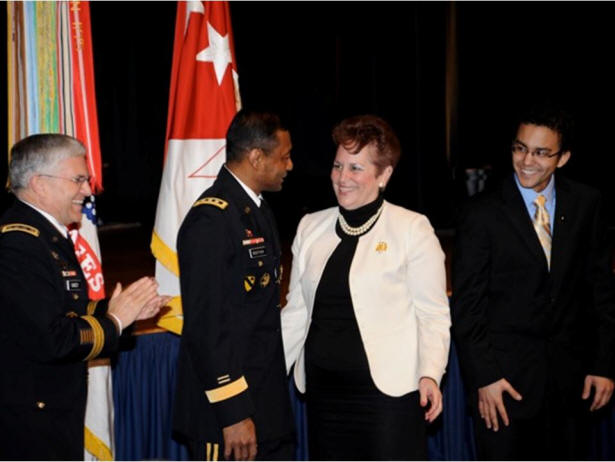 Prior to this assignment, he served in a variety of command and staff assignments, both domestic and foreign, most recently as Commanding General, US Army Recruiting Command..  He deployed to Iraq with the 1st Cavalry Division initially to support  Operation Iraqi Freedom and later as Commanding General of the Division.

General Bostick served as an Associate Professor of Mechanical Engineering at West Point and was a White House Fellow, serving as a special assistant to the Secretary of Veterans Affairs.  He is a 1978 graduate of the US Military Academy and holds Master of Science degrees in civil engineering and mechanical engineering from Stanford University.  He is a licensed professional engineer in Virginia and is a graduate of the US Army War College.

His decorations include the Distinguished Service Medal, Defense Superior Service Medal, Legion of Merit with two oak leaf clusters and the Bronze Star.  He and Renee have one son, Joshua.  His father is African American and his mother is a native of Japan.