Punchbowl, Hawaii. Kinzo Ernest Wakayama, a US Army veteran of World War I, will be buried with full military honors on March 27, 2006, at10:30 a.m. at the National Memorial Cemetery of the Pacific (Punchbowl) in Hawaii. Wakayama was born, a US citizen, on June 17, 1897 in Kohala, Hawaii, and passed away on November 27, 1999 at the age of 102 in Fukuoka City, Japan.

Wakayama volunteered and served in France as a private in the U.S. Army Medical Department’s 9th Ambulance Company from July 1, 1918 to April 22, 1919. He was awarded the WW I European Campaign Medal. He volunteered with his brother-in-law, Major L.L. Patterson, Medical Corps, in the U.S. Army Reserve.

According to the Encyclopedia of Japanese American History published by the Japanese American National Museum, during WW I the Territory of Hawaii issued a call to eligible men to register for the draft on July 31, 1917. In response, 838 ethnic Japanese enlistees and draftees answered the call, justifying the formation of a segregated company, Company D, First Regiment, Hawaii National Guard. This was the only unit in the US Army to use the Japanese language for intra Company communications and marching cadence.

The motivation of the ethnic Japanese was adventure, patriotism, to get away from the laborious work at the sugar, pineapple and coffee plantations, and, importantly, an opportunity to become US citizens. Despite the benevolence of Judge Horace Vaughn of the US District Court of Hawaii after the war in granting citizenship to 400 ethnic Japanese veterans, the territorial government did not recognize this decision. The veterans needed to wait until 1952 for the passage of the Walter-McCarran Immigration and Naturalization Act to become US citizens.

When Japan attacked Pearl Harbor on December 7, 1941, Wakayama was living at Terminal Island, in the port of Los Angeles, California, where he was the Secretary-Treasurer of the Western Fishermen Union of the American Federation of Labor, the first Japanese American to hold an AFL position. Wakayama was forcibly evicted from Terminal Island and he and his wife were sent to the Santa Fe (Race Track) Assembly Center and then to Manzanar internment camp, in eastern California. His personal papers, such as honorable discharge and pictures, were confiscated by the War Relocation Authority, the US Army and the Federal Bureau of Investigation and were never returned to him.

In 1943, Wakayama, then 48, and his second wife, June Toki, then 31, had their first son, Edgar, at Manzanar; second son, Carl, was born at the Tule Lake Segregation Center, also in California,in 1945; and third son, George, was born in Japan in 1948. As a result of Wakayama’s late second marriage, there is at least one generation gap between Wakayama’s military service during World War I and his three sons’ service during the Vietnam War. Wakayama had a son by his first marriage.

In December 1945, Wakayama expatriated to Kumamoto Prefecture, Japan, his wife’s ancestral home. In 1948 Wakayama moved his family to Fukuoka City, where he worked as superintendent of the American Movie Film Distribution Center of Kyushu Island. He also taught at Gakugei University, Fukuoka city, until he retired at age 62. Wakayama sent his three sons to the States in the early 1960’s.

On the occasion of his 91st birthday, Wakayama received from then Congressman Norman Mineta, now Secretary of Transportation, the US flag that flew over the US Capitol Building on June 17, 1988. Wakayama has treasured this Flag as a symbol of his patriotism for America. Then, on December 21, 1993 in Fukuoka City the Department of Veterans Affairs’ 75th World War I Anniversary Medal was presented to Wakayama -- a proud moment at age 96. 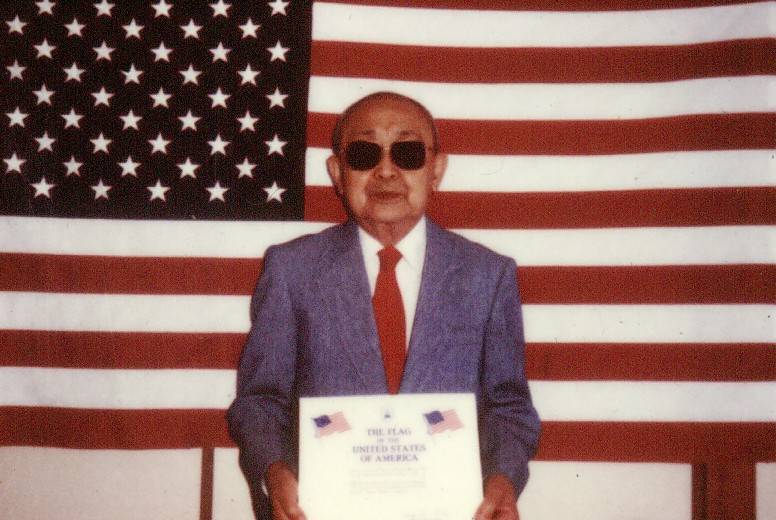 Kinzo Ernest Wakayama, on his 91st birthday, standing in front of
US flag presented by then Congressman Norman Mineta, now
Secretary of Transportation.

Eleven of Wakayama’s family served in the US Armed Forces, including his four sons: one in the Korean War, two in the Vietnam War, and one in the Hawaii National Guard. His nephew volunteered from the Jerome internment camp, Arkansas, for the 442nd Regimental Combat Team (RCT), and his brother-in-law served with the 100th Infantry Battalion. The 442nd RCT, which received over 18,000 individual awards, including 21 Medals of Honor, for combat in Italy and France, is the most highly decorated unit in the US Army for its size and time of combat. His son, Colonel Edgar Wakayama, USAR, a Medical Service Corps officer, was cited for his heroic actions at the Pentagon on September 11, 2001 when terrorists crashed a commercial airliner into the Pentagon Building. Colonel Wakayama was awarded the Soldiers Medal, the highest decoration for non combat valor.

The public is invited to attend the March 27 service at Punchbowl. If there are any questions, please contact Colonel Wakayama at; ejw7567@earthlink.net,or 6834 Heatherway Court, Alexandria, VA 22315 30