Menlo Park, California.  In a special ceremony on February 3, 2011,  Masami Robert Iso, 92 and terminally ill, celebrated the awarding of the Congressional Gold Medal that will be officially awarded in the fall of 2011 to the 100th Infantry Battalion, 442nd Regimental Combat Team, and Nisei who served in the Military Intelligence Service during World War II.  While serving in the 442nd, he participated in all of the 442nd campaigns, was wounded twice and spent the rest of his life in a wheelchair.

One hundred people, including Robert’s wife Rose, participated in the ceremony at the Veterans Affairs Menlo Park Community Living Center that was arranged by the Center and Colonel Bryan Shiroyama, US Air Force (Ret).   Lawson Sakai, 442nd veteran and President of Friends and Families of Nisei Veterans (FFNV) representative, presented Iso with a framed copy of Public Law 111-254 that the White House had provided to the National Veterans Network (NVN).  Since there will be no individual citations and a replica of the Congressional Gold Medal will not be minted until the summer, the copy of the law was the most tangible evidence of the award. 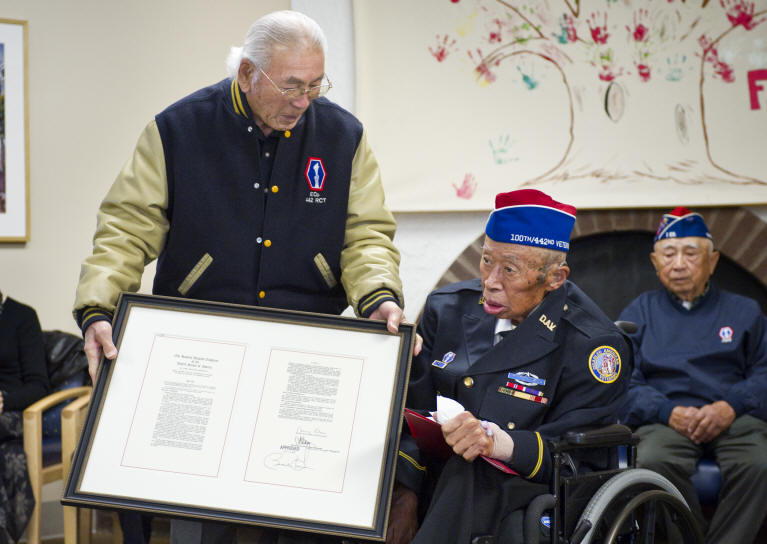 Sadly, Iso would pass away 48 hours later.  Younger brother James Y. Iso, a retired Foreign Service Officer, said “Bob, in his Disabled American Veteran (DAV) uniform with campaign ribbons and former DAV Commander cap, was alert and appeared to comprehend the entire ceremony and accepted the honor with dignity.  He enjoyed the television coverage on the evening news and newspapers articles the following morning.”   Following the war, Robert worked for the US Army as a civilian and was a life member of the Japanese American Veterans Association (JAVA).  During his free time he drove his friends and senior citizens to their appointments.

PL 111-254 bears the prominent signatures of President Obama, Speaker Nancy Pelosi, and Senate President Pro Tem Daniel Inouye and authorizes the award of the Congressional Gold medal to the 100th, 442, and Nisei who served in the MIS during World War II.  Of particular significance to Asian Americans is Senator Inouye’s signature, a Nisei combat veteran of the 442nd Regiment himself and now in a position of succession to the Presidency. Information on PL 111-254 may be obtained from Terry Shima, ttshima@comcast.net; 301-987-6746 or Christine Sato Yamazaki  (christine@csy-assoc.com).

FFNV is a member of the NVN, a coalition of 23 veterans and civic organizations organized to coordinate the Congressional Gold Medal Award Ceremony in Washington DC later this year.  Christine Sato Yamazaki, former President and CEO of Go For Broke National Education Center, is the Chairperson of NVN.