Washington, D.C.  On January 20, 2007.  JAVA elected by acclamation the slate of officers for 2007-09 at its Annual General Meeting held at the Harvest Moon Restaurant at Falls Church, Virginia.  There were no nominations from the floor or from the members at large, which was canvassed earlier.   The slate is as follows:

Following the elections, the new officers were sworn in by Mr. Kevin Secor, Veterans Service Organizations (VSO) liaison for the Secretary of  Veterans Affairs.  Robert Nakamoto, northern Virginia businessman and Korean War veteran succeeds BG Bert Mizusawa, who has served as President for the past four years. In his outgoing remarks, Mizusawa, who transformed JAVA from a social organization to a dynamic nationwide VSO dedicated to serve the interests of Asian Pacific American veterans, reservists, national guard and active duty military personnel, credited JAVA’s success to the dedication of its members. He also asked for JAVA’s continued support in the development of the Asian American Veterans Association that is designed to better represent the Asian American armed forces constituency.    Nakamoto commended Mizusawa for his vision and direction and resolved to raise JAVA to a new plateau. 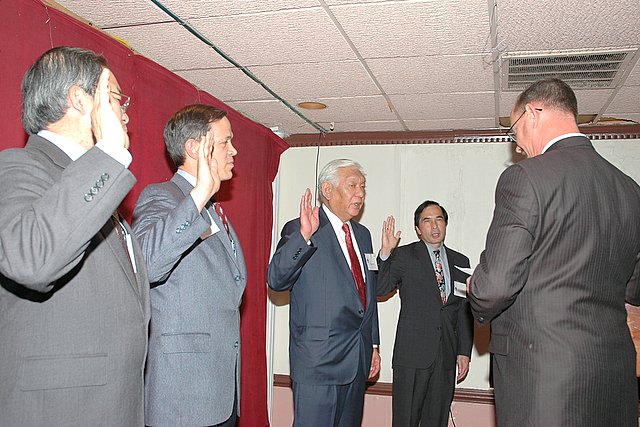 Following is a brief background on each elected officer:

Nakamoto, life member of JAVA,  is Chairman and principal owner of Base Technologies Inc., McLean, VA, a 20 year old information technology
company.  Prior to that he was Director of Corporate System, MCI, and Deputy Commissioner for Planning in Texas (Honorary Texas Citizen), and
Director for Planning of Medicare and Medicaid Programs.  He has served on Presidential Task Force for both parties.  He is a sansei (3rd generation Japanese American), graduated from California State University and was a Staff Sergeant during the Korean War.

Cal Shintani is a senior Vice President and Operating Group General Manager at CACI, International.  He has served in executive level positions for
firms such a Veridian, Unisys, and BTG.  He is Vice-Chair of the Mentor-Protégé program of the Industry Advisory Council and has served on
the boards of other business associations.  He graduated with distinction from the US Naval Academy, served as an officer on USS Long Angeles and
qualified as Nuclear Engineer Submarine Officer, retiring with the rank of Commander, US Naval Reserve.  His father, Munro Shintani, served in the
442nd RCT.  He has two children.

Earl S. Takeguchi, life member of JAVA and a retired Signal Corps Lt. Colonel, is a native of Hawaii.  He began his military career following graduation from the University of Hawaii, Honolulu.  After completing Officer Candidate School at Fort Benning, Georgia, he was commissioned in the US Army Signal Corps.  His assignments included Germany and Korea and domestic assignments at various locations, including the Pentagon.  He is Systems Engineer at Scitor, a Department of Defense contractor.

Nakamoto announced his appointments as follows: