Falls Church, Virginia.  Six JAVA veterans and their next of kin, representing the 442nd Regimental Combat Team (RCT) and the Military Intelligence Service (MIS), received the Bronze Star Medals and Legion of Merit in a formal military ceremony at the JAVA Annual Meeting luncheon at the Harvest Moon Restaurant at Falls Church, Virginia on January 17, 2009 before some 100 members and friends.  The awardees were:

*Also received the Legion of Merit. 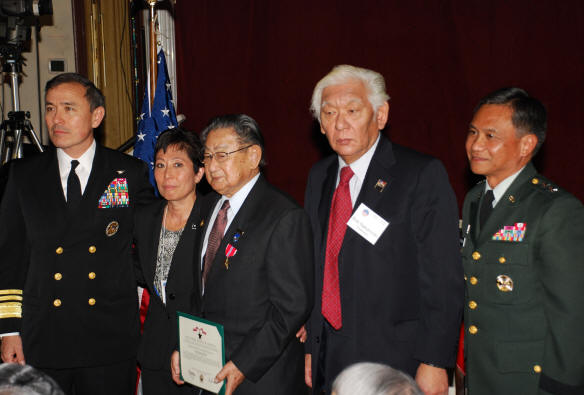 Prior to the presentation of the awards Lynn Heirakuji, Deputy Assistant Secretary of the Department of the Army and the personal representative of the Secretary of the Army, Pete Geren, commended JAVA for keeping “the story of the Nisei who served in WW II alive.” She also said that the Nisei experience in the MIS is used as a model for the Army military language requirements in the Middle East.  Over 700 soldiers of Middle East extraction with native fluency in Arabic, Farsi, Kurdish and Pashto have served with distinction.

MG Antonio Taguba, USA (Ret), assisted by three JAVA veterans in uniform, officiated over the awards ceremony.  Taguba said, “There has never been a statute of limitations in granting honors to those who willingly serve in uniform to defend our nation…My father, Sergeant First Class Tomas Taguba, USA, (Ret), a Philippine Scout and Japanese prisoner at Bataan during WW II, received his Bronze Star and other medals in 1999 at age 80, some 54 years after the war ended.  Each certificate was read, followed by the medal presentation and a photo that included members of the family and President Nakamoto, Vice Admiral Harry Harris, USN, DAS Lynn Heirakuji, and Major General Taguba.  Still photos and a video of the awards ceremony will be placed on JAVA website (www.javadc.org) .  The presentation ended with the playing of the 442nd fight song by the Camp Dance Quintet of California and the US military services medley played by the US Army Band, “Pershing’s Own.”  The music was arranged by Gary Johnson, who has enjoyed a 30 year career with the US Army Band.

This luncheon also featured the election of a slate of officers for the 2009-2011 term.  The Nominating Committee, chaired by Wade Ishimoto, canvassed the national membership for candidates and, subsequently, for approval of the slate.  Following the vote by acclamation, Kevin Secor, Special Assistant to the Secretary of Veterans Affairs conducted the swearing-in ceremony for: 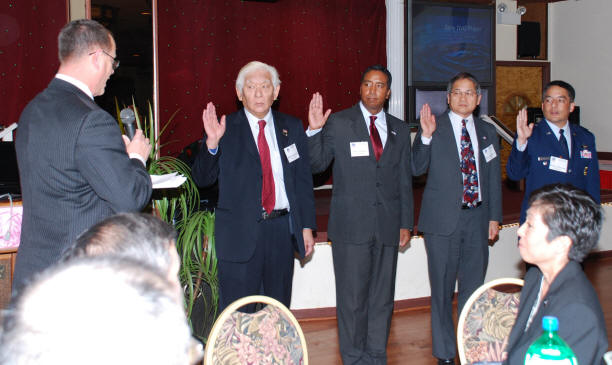 Their biographic information is on the JAVA website (www.javadc.org).  The Master of ceremonies was LtCol Michael Yaguchi, USAF (Ret). 30