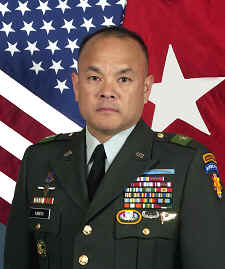 Vicenza, Italy. Brigadier General Jason Kamiya, Commanding General, Southern European Task Force (Airborne)(SETAF), was promoted to Major General on January 5, 2005 at his SETAF headquarters at Vicenza, Italy, located 30 miles west of Venice. He is the most senior US military officer in southern Europe.

When Hawaii Senator Daniel K. Akaka learned of General Kamiya’s promotion, he remarked, "I extend my congratulations and best wishes to General Kamiya on his promotion to Major General.  I am pleased to learn that he will be taking command of the Combined Joint Task Force (CJTF) in Afghanistan in the near future.  I am often complimented by my colleagues on the outstanding performance and service of the general and flag officers from Hawaii.  I wish him Godspeed and look forward to working with him in the future as we work to ensure our national security and provide the men and women in our military with the appropriate training and equipment for them to successfully execute their mission."

Major General Kamiya, my personal friend, is a highly dedicated soldier and an outstanding leader of men.  His promotion is well deserved.  The Japanese American Veterans Association congratulates him on his achievements and wishes him success on his deployment to Afghanistan."

In October 2004 General Kamiya, who was born in Honolulu, Hawaii, was invited by the town of Sant Angelo d’Alife, located about 300 miles south of Leghorn, to witness the dedication of a monument to honor the 100th Infantry Battalion, a segregated Japanese American unit, and the 34th Infantry Division, for liberating the area. General Kamiya’s father, Larry Kamiya of Honolulu, a member of the highly decorated 100th Battalion, fought in that battle.

General Kamiya was commissioned as an infantry 2nd Lieutenant on May 15, 1976 and was assigned to Korea as a rifle platoon leader. He has since been assigned to various domestic and overseas posts, including Japan, Panama, Saudi Arabia and now Italy.

A Japanese linguist, General Kamiya served at Camp Zama, Japan as Aide-de-Camp to the Commanding General, US Army Japan/IX Corps. At Saudi Arabia he was involved in Operations Desert Shield/Storm.

General Kamiya obtain his bachelor’s degree from Gonzaga University and his Master’s from the Naval Postgraduate School. He attended various other military schools.

General Kamiya is married to the former Carmen Unciano of Kauai, Hawaii and they have two daughters, Kelly (age 18) and Jamie (age 13).