Capitol Hill, Washington, D.C.   Robert Nakamoto, President of the Japanese American Veterans Association (JAVA), was among the 40 representatives of veterans service organizations (VSO) to present oral testimonies and discuss veterans issues with Democratic and Republican members of the House of Representatives Committee on Veterans’ Affairs.  Chaired by Chairman Bob Filner, the roundtable was held on January 20, 2010, in the Cannon Building, to discuss priorities for the second session of the 111th Congress.

As quoted in the House Veterans Committee press release, Chairman Filner stated, “Today’s roundtable marks the second time during the 111th Congress that this Committee has met with veterans’ advocates to discuss the important issues facing our Nation’s veterans and plan how best to solve these problems. The purpose of today’s meeting is to build upon the successes of the first session and collaborate on how we can better serve our veterans and wounded warriors going forward.” 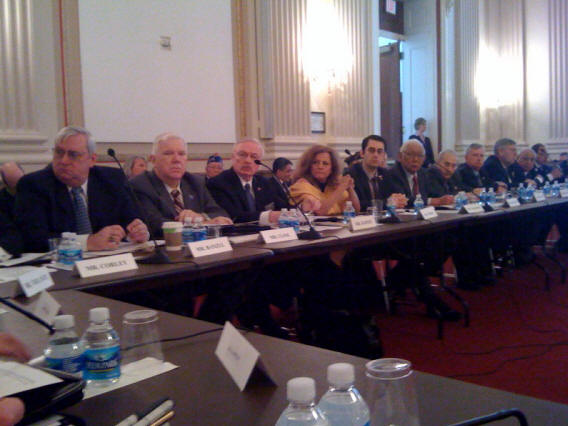 “Chairman Filner detailed the priorities of the Committee which include ensuring adequate VA budgets for the next two years.  Following the passage of advance funding legislation, Congress will approve a budget for Fiscal Year 2011 and 2012.  Filner also discussed the need to reconcile health care and benefits legislation with the Senate.  The House passed legislation to provide support for veteran caregivers, improve access and care options for female veterans, prevent veteran homelessness, provide better insurance options, increase disabled veteran housing grants, and strengthen reintegration programs for returning veterans.  Chairman Filner reminded veterans of the Committee’s commitment to fix the claims processing system, restructure the VA for the 21st Century, conduct oversight of VA spending, and monitor the progress of the Post-9/11 G.I. Bill.

“Participants discussed the priorities of each of the 40 different veteran advocacy organizations.    Many discussed how the disability claims backlog impacts veterans while they are most vulnerable.  The lengthy wait for some veterans’ disability claims has contributed to financial problems and a domino effect that can result in economic turmoil from which some veterans never recover.  Additional issues addressed included caregiver needs, the importance of strong reintegration programs, and the immediate need for greater VA outreach to alert veterans of available benefits and programs.”

In his remarks, Nakamoto said that while 120,000 Japanese were incarcerated in internment camps, Nisei volunteered to serve in the US Army.  The combat performance record of the of the 100th Battalion and 442nd Regimental Combat Team in Europe has never been surpassed and the 3,000 volunteers who served in the Asia Pacific Theater were recognized by General Douglas MacArthur as his “secret weapon,”  the highest tribute a commander can pay.  Nakamoto presented the following seven issues, which were formed as the result of discussions with various Asian American veterans organizations:

1. Claim Processing for Benefits.  Processing and approval times are too long and the forms are too onerous and confusing.

2. Long Term Care Policies.  Private care is not an option for many elderly veterans.  Policies need to be improved for veterans, particularly those living in high cost of living areas.

3. Medical Research Priorities Reallocated.  The Veterans Administration (VA) must conduct research on certain diseases that have a disproportionate effect on Asian Pacific American veterans, such as Hepatitis B & C, cervical-stomach-liver cancers, and diabetes.

5. Health Care Programs.  There is a need to protect against disproportionate cost increases such as enrollment fees, co-pays and deductibles.

6. Tax Credits and other Business Incentives.  Congress must expand incentives for businesses that actively hire veterans.

7. IRS Regulations Regarding Membership.  IRS should conduct a review of current VSO membership rules, which appears to be far too stringent.  We would like to see the Associate Members ratio to Regular Members increased from the present 2.5 percent.