Washington, DC.  Andrew L. Chernak, sculptor and designer, announced that the 442nd Regimental Combat Team (RCT) will be one of the focal points of the Gold Star Mothers Memorial that is planned for construction in Washington, D.C.  The American Gold Star Mothers (AGSM), Inc., was organized on June 4, 1928, in Washington DC, to honor those mothers whose sons or daughters had died while serving their nation in the Armed Forces.  Chernak, born and raised in Philadelphia, Pennsylvania, joined the US Army in 1968 and served as an infantryman in Vietnam, where he was awarded two Purple Hearts and a Bronze Star.  After his discharge, Chernak went into sculpting full-time.  Many of his works are displayed in such places as the US Military Academy at West Point, Medal of Honor Gallery of the National Guard, D-Day Museum, and the Arlington National Cemetery.

In describing his conceptual design, Chernak said, “the central point of the model is a grief stricken Gold Star Mother statue.  Surrounding this centerpiece on the granite arcs I’ve placed bronze relief sculptures of the faces of actual Gold Star Mothers facing their fallen sons and daughters.”  Chernak said he wants to depict “the grief and loss mothers have endured have not left them, yet they rise above the pain and volunteer their services at hospitals and other places selflessly for the good of mankind.” 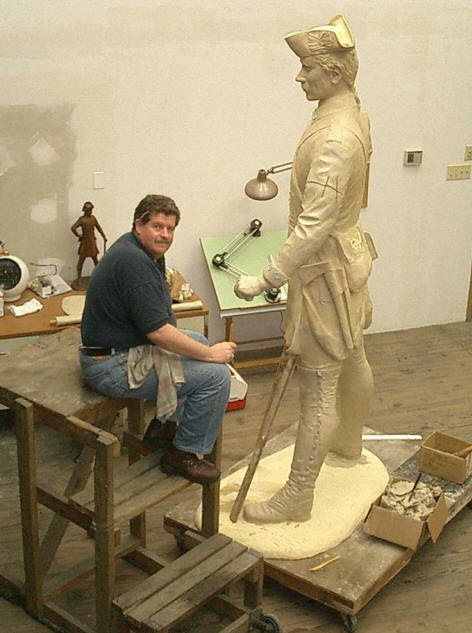 Sculptor Andrew Chernak in his studio with the US Army Engineers memorial statue,
which now can be seen at the Army Engineers Training Center at Fort Leonard Wood, Missouri.

Chernak said “The 442nd images will be a focal point of the World War II section.  The inclusion of the 442nd RCT was made possible by a divine occurrence. My wife Terria, was telling her doctor of the project and of my search for families whose sons had made the sacrifice for freedom. The doctor proudly announced that his uncle was a veteran of the famed 442nd!  The connection was made. It was specially so for me as members of the  442nd were among my childhood heroes. I was honored to speak to an official of the Japanese American Veteran Association, who relayed to the Japanese American veterans community my desire to have three heroes of the 442nd represented on the monument.

“I received six submissions to fill the required three positions. Over a short period of time I got to know the faces by name. Feeling that too little honor has been given to the 442nd and saddened that I could not make an actual life size statue to honor these great Americans, I decided that ALL six submissions would be used. I am truly honored to sculpt my fellow infantrymen from another time, another war”

The five mothers and six children who will be featured are:

Mrs. Sami Murata and sons, Sergeant (SGT) Robert Murata (Company L, 3rd Battalion) and Private First Class (PFC) Harry S. Yamasaki (Company I, 3rd Battalion). Mrs. Murata was born in Yamaguchi Prefecture, Japan and had two sons (by different fathers), SGT Murata and PFC Yamasaki, both born in Honolulu, Hawaii.  SGT Murata volunteered for the 442nd, trained at Camp Shelby, fought in Italy and eastern France where he was killed in action on October 28, 1944 during the rescue of the trapped Texas “Lost Battalion.”  A few days later, his brother, PFC Yamasaki, was killed in action, immediately after the Lost Battalion was rescued.

Mrs. Yae Moriguchi and PFC Haluto Moriguchi (Company C, 100th Battalion of the 442nd).  Mrs. Moriguchi was born in Hyogo Prefecture, Japan and Haluto was born in San Francisco, California in 1925.  He was interned with his family at the Amache, Colorado internment camp.  He enlisted in the Army on May 29, 1944, trained in Camp Shelby, Mississippi, and joined the 442nd RCT in Menton, southern France.  In March 1945, the 442nd returned to Italy to break the German stronghold, known as the Gothic line, in the Tuscany region.  On April 5, 1945 PFC Moriguchi was killed in action on Georgia Hill, near Mt Folgorito.

Mrs.Josephine Nilges and Captain (CPT) Edward Joseph Nilges (Headquarters, 3rd Battalion, 442nd RCT).  CPT Nilges was born in Cleveland Ohio in 1915.  He obtained his bachelors degree at John Carroll University in Cleveland in 1937.  He was drafted into the Army in 1940 and joined the 442nd RCT in March 1943 as a platoon leader.  He survived the Italian and eastern France campaigns and was killed in action on April 6, 1945, immediately after the 442nd captured Mt. Folgorito that paved the way for the surrender of Germany.

Mrs. Misayo Ninomiya and PFC Takao Ninomiya (Company B, 100th Battalion, 442nd RCT).  Mrs. Ninomiya was born in Hiroshima Prefecture, Japan and PFC Ninomiya was born in Fresno, California.  They were interned in the Jerome, Arkansas internment camp.  PFC Ninomiya trained at Camp Blanding, Florida, and was shipped to Italy as a replacement for the 442nd RCT.  He was killed in action in the Serravezza, Italy area on April 6, 1945 immediately after the 442nd RCT broke through the “impregnable” German Gothic line.

Mrs. Fuyuko Okura and Private (PVT) Susumu “Babe” Okura  (Company I, 3rd Battalion, 442nd RCT).  Mrs Okura was born in Okayama Prefecture, Japan and PVT Okura was born in Wilmington, California.  They were interned in the Jerome, Arkansas, internment camp.  Susumu’s father is Momota Okura and his brother is Kiyoshi Patrick Okura. Susumu volunteered for the 442nd RCT, trained in Camp Shelby, Mississippi, and deployed to Italy on June 7, 1944.  He survived the liberation of Bruyeres and other nearby towns and the rescue of the trapped Texas battalion.  PVT Okura was killed in action on November 2, 1944.