Washington, D.C.   The Japanese American Veterans Association  elected  the following officers by unanimous acclamation at its biennial election of officers on January 15, 2004: 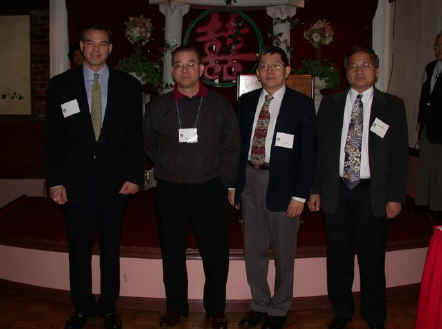 For the first time in its 12-year history, all of the new JAVA officers are from the post WW II generation.

Presently a Colonel serving in the Army Reserve, Mr. Mizusawa’s election two years ago marked the beginning of the transfer of leadership from the WW II generation as determined by the JAVA Executive Committee.   At that time, JAVA embarked on a program to expand  its membership outside of the Washington, D.C., area by emphasizing the infusion of post-WW II veterans,  obtaining the recognition as a true "Veterans Service Organization" (VSO) by the Department of Veterans Affairs to advance the interests of Japanese American veterans, and expanding the  visibility of Japanese American veterans both nationally and internationally.

In his remarks after being re-elected,  Mr. Mizusawa  noted he was satisfied with the progress in each of the three goals, however, he called for further expansion of membership in the national constituency; the continued  need to educate both national and international audiences on veterans’ contributions to protect American freedom and democracy through an improved newsletter,  press releases, speakers and the website;  and to work with other non Japanese American veteran organizations  and other VSOs to push the cause of veterans.

Mr. Mizusawa said that many Japanese American and other veterans organizations are looking at JAVA for ideas and leadership and we must commit to that end our resources and know-how in an apolitical manner.  He asked the members for suggestions as to the kind of programs they wanted and at the same time asked them to step forward to assist JAVA.   He said that all this will require funds and we need to generate a dynamic fund raising campaign. In addition, Mr. Misusawa announced that the JAVA Tsunami Relief Fund collected $500 in donations and a check was sent to the American Red Cross International Response Fund.

Mr. Mizusawa also announced that he has been recalled to active duty and will leave shortly for Afghanistan for a period of 90 to 180 days.

The backgrounds of the newly elected JAVA officers for the 2005-2007 period  are as follows:

President.   Bert K. Mizusawa is president of PaxCentric, Inc., a consulting firm.  Previously he served as president of a technology firm, a member of the Senior Executive Service assisting the Secretary of the Army and a professional staff member for the Senate Armed Services Committee.   Mr. Mizusawa served as an infantry officer in Italy and the Korean DMZ, where he was decorated for combat leadership by the United States and the Republic of Korea.  After leaving active duty, he was a MacArthur Fellow at Harvard's Center for Science and International Affairs.  He also practiced law with the Wall Street firm Sullivan & Cromwell.

Mr. Mizusawa is a colonel in the Army Reserve, and has commanded at various levels, including the brigade level.  His military awards include the Silver Star, Combat Infantryman Badge, Master Parachutist Badge, Ranger Tab, and other US and foreign awards.   He currently serves on the Association of the US Army Advisory Board. He received a Bachelors of Science from the U.S. Military Academy, where he graduated first in his class, a Master in Public Policy from Harvard's Kennedy School of Government and a Juris Doctor from Harvard Law School.  He is admitted to the bars in New York and Washington, D.C.   Mr. Mizusawa is married to the former Yvonne Facchina, who serves as senior counsel at the Federal Reserve

.  Thomas "Vic" Mukai, a retired Army colonel, is native of New York and was commissioned in the Regular Army through the Army Reserve Officer Training Corps program at Virginia Polytechnic Institute. His tours included assignments to Germany, Korea (three tours), Turkey, Japan, and Belgium. During Mr. Mukai’s 30-year career, he commanded a tactical signal company in the 2d Infantry Division, Korea, and a signal battalion in California.

Mr. Mukai also served on the Joint Staff (J3) in the Pentagon during the first Gulf War and later as the Joint Staff C3 representative of the permanent U.S. Delegation to the NATO Military Committee, Brussels, Belgium. After leaving the Army, he was a consultant to the Department of Defense and an appointed U.S. delegate to the International Telecommunications Union, a United Nations organization, in Geneva, Switzerland. In his limited spare time, Mr. Mukai is an amateur radio operator, is active in the Boy Scouts, serves on a Fairfax County Board of Supervisors advisory committee, and supports JAVA activities.

.  Dave Buto,  son of Colonel Jun (442nd & OSS) and Ann Buto of Hawaii, retired Army Lieutenant Colonel,  Military Academy graduate, Class of 74.  After two years in the Infantry, he served in various assignments in military intelligence and automation over a 22 year career.  He spent seven years as a technology consultant with Booz-Allen & Hamilton and recently started his own consulting firm.  He spends most of his time trying to keep pace with his wife of 20 years, Joanne, their energetic eight year old daughter, Alana, and their feisty Golden Retriever, Alex.

Mr. Buto’s favorite pastime is traveling.  His favorite thing to do on a rainy Friday is to work on the JAVA digitization project at the National Archives.  He lists his favorite movie as LOTR.  His favorite vacation spot and military station is  Lauterbrunnen and Heidelberg.  Tachibana is his favorite restaurant.

Treasurer.  Earl S. Takeguchi, a retired Army Lieutenant Colonel and a native of Hawaii, began his military career following graduation from the University of Hawaii, Honolulu, where he earned a Bachelor of Science Degree in Civil Engineering.  He attended the Officer Candidate School at Fort Benning , Georgia.  He was commissioned in the U.S. Army Signal Corps.  His assignments included tours of duty in Germany and Korea with Army Signal units.  Mr. Takeguchi had assignments outside of the Signal Corps with the Recruiting Command as an Area Commander in San Francisco and an assignment with the Corps of Engineers as a project engineer with the Savannah District.

Mr. Takeguchi’s last assignment was at the Pentagon at the Department of the Army with the Office of Director of Information Systems for Command, Control, Communications and Computers.  During his assignment at the Pentagon, he was tasked to organize and lead a special team to resolve, develop and implement a spectrum management system to support the Army Central Command and U.S. Central Command for Desert Shield/Storm.  He retired as a Lieutenant Colonel.  He currently works as a Systems Engineer supporting the Department of Defense.