Havre de Grace, Maryland.    “When Grant Ichikawa rang the doorbell and handed me a check of such a large amount, I was overwhelmed and started to tear up by the aloha of complete strangers”, Sergeant Leana L. Nishimura said.  Nishimura, a Chaplain’s assistant with Headquarters Company 1-224th Supply and Service Battalion in Edgewood, Maryland, and divorced single mother of three young children, returned on Halloween Day, 2005, after spending a year in Iraq.  Ichikawa, a former World War II veteran of the Military Intelligence Service is Chairman of Special Projects of the Japanese American Veterans Association, also known as JAVA. JAVA is a non-profit organization recognized by the Veterans Administration as an official veterans service organization representing the interests of Asian Pacific American (APA) veterans, reservists, national guard and active duty personnel.   There are 360,000 APA veterans. 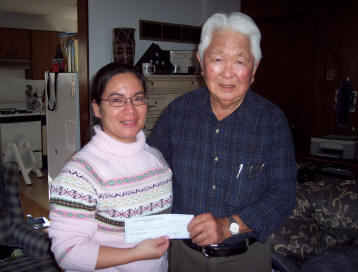 Nishimura, a sansei (third generation Japanese American) joined the Maryland Army National Guard, 129th Signal Battalion, in August 2002 as a communications specialist..  Prior to that she served as a contract specialist with the Hawaii Air National Guard.  Her motivation for enlistment was her desire to serve her country while supplementing her income.  Her financial situation surrounding her divorce in the summer of 2001 destroyed her credit rating.  “I was broke, my life was shattered. However, I was determined to perform my military commitment.  When you put on the uniform you must take the responsibility that comes with that uniform, and that includes going to war and taking all the risks, including getting wounded or even death,” Nishimura said.

Senator Daniel K. Akaka (D-HI), Honorary Chair of JAVA, observed that, “Sergeant Nishimura’s experience illustrates the challenges that our nation’s deployed service members and their families face.  This is especially true for members of the National Guard who are being deployed to combat zones in unprecedented numbers.  It is particularly challenging for many parents, especially single parents, like Sergeant Nishimura, who have to rely on family and community support during their deployment.  As a veteran myself and future Chairman on the Senate Committee on Veterans Affairs, I remain committed to ensuring that access to the necessary care and support systems exist for all those who serve our nation, and I will keep working to ensure that VA carries out the outreach needed to reach members of the Guard and Reserves who may not know of their eligibility for benefits and services.” He added, “Sergeant Nishimura’s commitment to our country is a demonstration of the loyalty that many Asian American Veterans have as true patriots.”

Nishimura believes that every member of the service should spend one tour away from home “in a less than favorable environment.” Thus, when the 129th Signal Battalion was ordered to Iraq, she prepared for the assignment eagerly and seriously, departing on Thanksgiving Day, 2004.   Nishimura’s team was assigned to Tikrit, Iraq, where her camp was often hit by mortar rounds.  Although shaken and afraid, she was determined to do her duty.   Throughout her deployment, Nishimura sent money home to her mother, Cynthia Nishimura, of Honolulu, to support her children while she was away.  As a result, she was left without a home and very little money when she returned to Maryland.  In addition, Nishimura often suffered Post Traumatic Stress Disorder (PTSD) caused by the effects of fighting a terrorist war and the pain of being away from her three children.  She would wake up at night in a cold sweat with nightmares of her and her children being caught in enemy attacks. 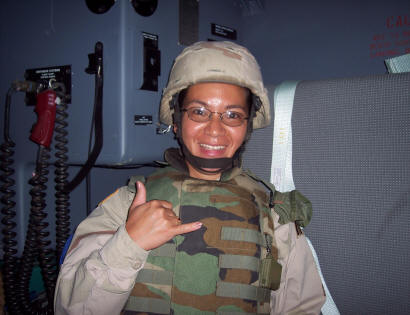 Although it is nearly a hundred miles from her previous home and support system in Charles County, Maryland, Nishimura decided to take the job at Havre de Grace Military Reservation as it provided better pay and stability.  She likes her present job and plans to make military her career.  Her adjustment to raising her family has been facilitated by an ideal work environment, the assistance from neighborhood churches, favorable articles in the press, donations of money, food, clothing and furniture from friends and strangers.  Now almost one year after her family reunited, life is gradually returning to normal with the raising of three children and with normal daily activities of school, homework, Cub Scouts and church activities.  What Nishimura enjoys most about being reunited is being able to tuck her three children, Cheyenne (5), Dylan (8), and T.J. (9), into bed every night and their discussions of their hopes and dreams.  T.J., the eldest, seemed to be the most shaken by Nishimura’s deployment, and often speaks of his plans to apply to the US Army Military Academy at West Point.

Nishimura said she is especially grateful to the Maryland National Guard “Partners in Care Ministry” which introduced her to the First Christian Church of Havre de Grace, to Major Timothy Mullen who helped her in many ways to get settled including raising the funds to purchase plane tickets for her children to rejoin her, to her neighbors, and to JAVA, which launched the fund drive.  When she received the $1,500 check her first impression was that she could now get beds for her two sons, who had been sleeping on the floor, winter clothes for the children, food for the freezer which was purchased by her mother in preparation for the winter months.  Nishimura reminds her children daily to count their blessings they are now together, thanks to the generosity and support of the fellow Americans.

According to the US Army there are more than 155,000 women, including over 16,000 single mothers, serving in Iraq and Afghanistan.  Of the 155,000 about 11,000 are Asian Pacific Americans, over a 100% rise in 10 years.  A Pentagon official said the number of women entering the armed forces is unprecedented and impressive.

Nishimura continues to condition her children on the possibility of another deployment to the war zone.  “I keep reminding them that I am now a Chaplain’s Assistant, and if God needs to use Mommy to help the other soldiers, they have to let me go.”  In response to a reporter’s question, Nishimura said “things still aren’t normal, but thanks to my neighbors, friends and total strangers, my church, the press and JAVA, our life is coming together.  The best I can do is to take it one day at a time, sometimes, even one hour at a time.  I trust in the Lord and know that he will provide everything I need … but only in his time.  I feel the kids struggle as much as I do through the memories of me being deployed. There are many people and organizations across the country that have helped me get back on my feet, life will never be the same as it was before I deployed, but getting through the deployment and back together was the hardest … now we press forward and try to keep going.”

Earl Takeguchi, JAVA Treasurer, said over $3,500 have been received.  A California church women’s group probably represents the views of all donors and potential donors when it said in a note to JAVA:  “We would like the money to be used to purchase Christmas gifts for the children …we would like Sergeant Nishimura to know that we thank her for serving her country while enduring great personal sacrifices.”  Tax deductible donations may be sent to Earl Takeguchi, Treasurer, JAVA; 7201 White House Dr; Springfield, VA 22153.  30