Washington, D.C .  For the Japanese American Veterans Association, Veterans Day 2006 was like no other.  Having been elected a few months ago to membership in the Veterans Day National Committee, which is mandated by Congress to plan and coordinate veterans activities on a national scale, two JAVA members, Vice President Cal Shintani and Executive Director Terry Shima, attended the White House breakfast hosted by the President George Bush, Commander in Chief, and Mrs. Bush. 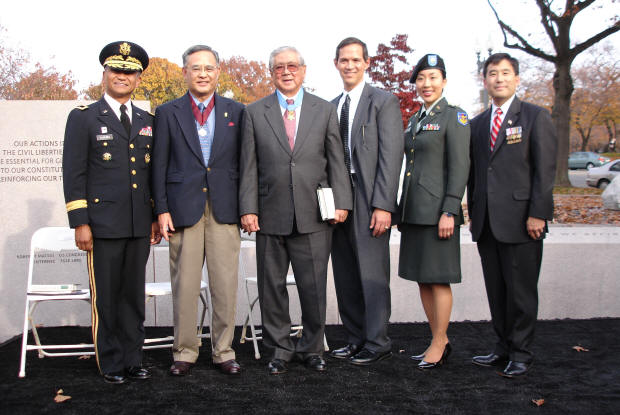 The veterans organizations’ national commanders were then bussed to Arlington Cemetery where they witnessed the President laying the wreath at the Tomb of the Unknown, stood to be recognized when JAVA and Shintani’s names were called, and watched the JAVA color guards, Glenn Kikuchi and Chosei Kuge, march forward and be similarly announced.    Five other JAVA members were seated in box seats.

In mid afternoon, JAVA held its 6th Annual Veterans Day Program at the National Japanese American Memorial to Patriotism. The Organizing Committee was headed by Michael Yaguchi. The keynote speaker was MG Antonio Taguba, the highest ranking Filipino American serving in the US Armed Forces, and the Associate Speaker was Hershey Miyamura, Medal of Honor recipient.  Both Taguba and Miyamura are JAVA’s members.

General Taguba said “We are reminded of the incredible acts of heroism and service by Japanese American veterans during WW II and the Korean War.  They faced tremendous adversity at home from those who questioned their loyalty.  Their profound patriotism is symbolized at this Memorial -- a place of honor and remembrance of the deep sacrifices of Japanese Americans who fought courageously in combat and of the brave men who died so America can enjoy the blessings of freedom. … If ever there was a question about the loyalty and patriotism of Japanese American veterans, it has been answered by the legacy of your heroism and citizenship and by your presence here today.

“To the Asian American veterans of WW II, Korea, Vietnam and Desert Storm, there are no exact words to express our deepest gratitude for the price they paid for the freedoms we continue to cherish.  Their sacrifices carved a path in American’s history that Asian Americans can and will serve in the nation’s military. …   Of the 24 million living veterans today, there are 360,000 Asian Americans to whom we pay tribute on these grounds.  Hundreds of stories of their heroic acts have been chronicled, yet, there are thousands more of stories yet untold,” Taguba concluded.”

When Pearl Harbor was attacked on December 7, 1941 Hiroshi Hershey Miyamura was 16 years old, living in Gallup, New Mexico.  While his family was not incarcerated like the 120,000 Japanese Americans in ten US Army run stockades in desolate locations in middle America, Miyamura was convinced at that early age that the strongest statement the Japanese Americans could make to the question of their loyalty was to go into battle like the segregated 100th Infantry Battalion that was already fighting in Italy.  Miyamura enlisted as soon as he was eligible, but by the time he arrived in Italy the European war was over.  The outbreak of the Korean War in 1950 would find Miyamura back in uniform and shipped to Korea where he would be assigned to the 3rd Infantry Division as a machine gun squad leader.

On April 24, 1951, Miyamura and his men faced an overwhelming Chinese invading force. Under strong enemy fire, he directed his unit to withdraw. Covering their withdrawal, he alone fought the enemy force using a machine gun until his ammunition ran out and then used his bayonet in hand to hand combat. Wounded in action and finally taken prisoner, Miyamura spent 28 months in a Chinese prison camp where he was abused, tortured and starved. For his display of valor over and beyond the call of duty, Miyamura was awarded the Medal of Honor.

Judge Vincent Okamoto, Superior Court Judge of Los Angeles, in his keynote address to dedicate the monument to Miyamura in Gallup, New Mexico on August 19, 2006,  said “The epic saga of Hiroshi Hershey Miyamura is that of a quiet, modest man. Despite adversity and injustice, he never lost his faith in America.  So long as this nation can produce people like him we can be confident that freedom and the republic will endure.”

COL Sunao Phil Ishio, USAR, Ret, founder-president of JAVA, observed that “JAVA has made favorable strides in gaining name recognition on a national scale.  … that JAVA’s membership in the Veterans Day National Committee has placed JAVA on par with other large veterans service organizations for these purposes. This is a development we should all be proud.”  30