Tyson’s Corner, Virginia.  Christine Sato-Yamazaki, out going President and Chief Executive Officer of the Go For Broke National Education Center of Torrance, California, received the Japanese American Veterans Association’s prestigious COURAGE, HONOR, PATRIOTISM Award at a special ceremony and luncheon at the elegant Tower Club on May 26, 2010.  President Robert Nakamoto praised Christine for her leadership to collect oral histories through the Hanashi Program and her success in spreading the Nisei story through the Center’s various education programs, including the teachers’ training program with which JAVA and the National Japanese American Memorial Foundation partnered in the Washington, DC area. The one page citation was read by Dr. Norman Ikari, a wounded veteran of the 442nd Regimental Combat Team and friend of Christine.

The inscription on the Award states,  “In recognition of your distinguished leadership, dedication and vision in preserving the legacy of the heroic contributions and sacrifices made by Japanese American soldiers during World War II”  This inscription was collectively written by JAVA’s 13- member Executive Council. 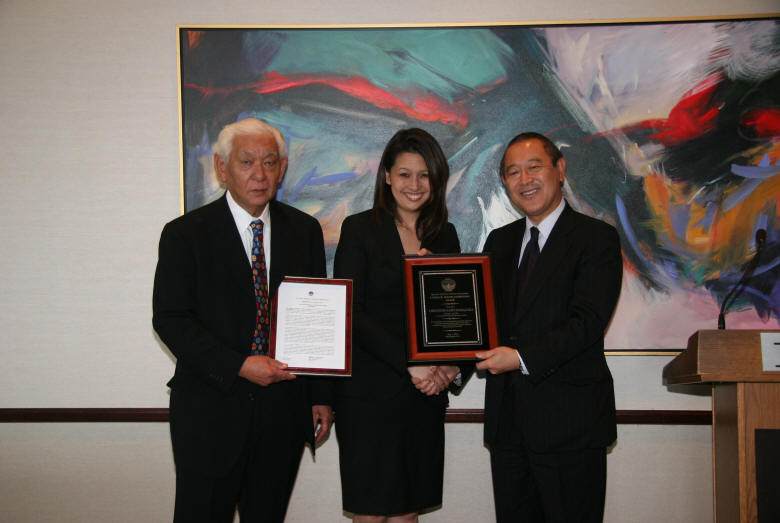 The ceremony was attended by Ambassador Ichiro Fujisaki of the Embassy of Japan, who extolled Christine’s 13 years of devoted service to promote the Japanese American veterans’ cause.  The Ambassador told Christine that her leadership to educate students at the national level on the role played by Japanese Americans to defend freedom is vital at this point in time.  He commended Japanese Americans for their loyalty and willingness to fight for America while at the same time being proud of their racial heritage.  At the conclusion of his remarks, Ambassador Fujisaki presented the COURAGE, HONOR, PATRIOTISM  Award to Christine.

Ms. Sato-Yamazaki, upon receiving the award, told the audience:  “I would like to express my appreciation to JAVA for the COURAGE, HONOR, PATRIOTISM  Award.  I am deeply touched and honored to receive this award, and especially to be here with all of you today.  I thank Bob Nakamoto for hosting this luncheon and Ambassador Fujisaki giving up his valuable time to attend this event.   I did my job at the GFBNEC for the past 13 years because of the veterans.  I firmly believed that your story needed to be told, and that the lessons that come from it would resonate with all Americans. It has been such an incredible journey to first start the Hanashi Oral History Program and then to work on the teacher training program. I will always remember the effect your story had on the teachers as I saw streams of tears fall from their faces as they learned of the hard-won details. Your loyalty and contribution to America will be an inspiration for many generations to come. I will cherish the work that we did with all of you for the National Veterans Network, Hanashi and Teacher Training. JAVA has been an incredible partner and I have the utmost respect for what you do here on the East Coast to keep the story alive at the highest level, including the White House. I feel blessed to have known all of you and please know that you will always remain in my heart as I move forward.”

Though unable to attend the ceremony and luncheon, Honorary JAVA Chairs Senators Daniel Inouye and Daniel Akaka, former Transportation Secretary Norman Mineta, Veterans Affairs Secretary Eric Shinseki, Lieutenant General Thomas Bostick, US Army, and Major General Tony Taguba, US Army (Ret), each expressed that his best wishes be conveyed to Christine.  Senator Inouye had provided a letter to JAVA in which he said, in part, “I commend Christine for her strong leadership and tireless dedication to preserve and share the Japanese American story during World War II.   For 13 years she has played an integral role of promoting our story to future generations.”  30