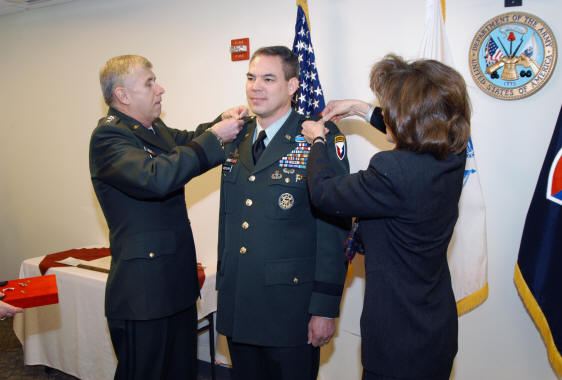 Mizusawa is currently serving as an Army reservist. During his duty time, he serves as AMC’s assistant deputy chief of staff for operations. In his civilian time, he is the president of Paxcentric, Inc. and the Japanese American Veterans Association.

AMC’s commanding general, Gen. Benjamin S. Griffin and Mrs. Mizusawa pinned the stars on. His sons, Mark and Michael, placed the insignia to his epaulets while his youngest son, Eric, pinned the star onto his dad’s beret.

Mizusawa has served the U.S. Government as both a civilian and member of the U.S. Army. As a civilian, he was head of the Department of the Army’s interagency and international affairs. He was also a professional staff member on the Senate Armed Services Committee where he had staff oversight of defense strategy, the unified command plan, three combatant commands, terrorism and U.S. involvement in the Balkans.

Mizusawa holds a bachelor’s from the U.S. Military Academy at West Point. He also earned a juris doctorate from Harvard Law School, a master’s in Public Policy from Harvard’s Kennedy School of Government and a master’s of Strategic Studies from the U.S. Army War College. He is a member of the New York and District of Columbia bars.

JAVA is currently updating its list of Asian Pacific American general and flag officers for its website (www.javadc.org). We wish to invite you to make any additions and changes. Please contact Terry Shima, 301-987-6746; ttshima@worldnet.att.net). 30