LSA Anaconda, Iraq. The “Go For Broke” 100th Battalion, 442nd Infantry, a contingent of the Hawaii National Guard 29th BCT (Brigade Combat Team), returned to Hawaii in late December 2005 and early January 2006 after one year of combat duty in Iraq. The last contingent of the 29th Brigade Combat Team is scheduled to return by early February 2006, according to dispatches from Captain Kyle Yonemura, 29th Brigade Combat Team Public Relations Officer. Yonemura said the “colors of the 29th Brigade Combat Team were furled and cased in a protective sheath at a Transfer of Authority Ceremony held in front of the Joint Defense Operations Center at Logistics Support Area (LSA) Anaconda, located 50 miles north of Baghdad, on January 12, 2006. Earlier, the 100th Battalion flag, carried in Italy and France during WW II, was also cased for shipment to Hawaii. 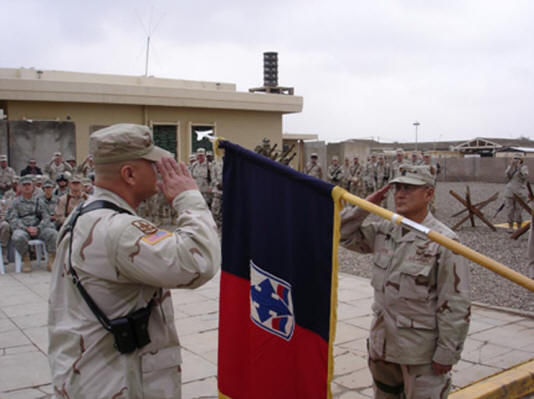 The brigade colors are saluted by Brig. Gen. Joseph Chaves and Command Sergeant Major Robert
Inouye as the brigade flag is lowered on the flag pole in front of the
at LSA Anaconda,

This is the 100th Battalion, 442nd Infantry’s second return from overseas combat duty, the first being when the 442nd Regimental Combat Team, including the 100th Battalion, returned from Italy in July 1946. At that time, New York City gave an unprecedented welcome, President Harry Truman reviewed the 442nd RCT at the Ellipse following its march down Constitution Avenue in Washington, D.C., and the Governor of Hawaii officially deactivated the colors in Honolulu.

The 100th Battalion, 442nd Infantry, was reactivated in 1947 and became a part of the Hawaiian Army Reserve Command. For its deployment to Iraq, the 100th, 442nd Infantry became one of the four infantry battalions of the 29th Brigade Combat Team, Hawaii National Guard, which is one of the 15 elite readiness brigades of the US Army. A readiness brigade must be trained and equipped to deploy within 90 days of a federal call-up. Consisting of 675 men mainly from Hawaii, American Samoa, Guam, and Saipan , the 100th Battalion, under the command of Lt. Colonel Colbert Low, began training in August 2004, received further training at Fort Bliss, Texas, subsequently validated for combat at Fort. Polk, Louisiana, and deployed to Iraq on January 26, 2005. The 29th Brigade Combat Team, commanded by Brig. General Joseph Chavez, consists of 3,500 members, 2,200 from Hawaii and Pacific Islands and 1,300 from California, Oregon and Minnesota.

Retired Colonel Walter Ozawa, former Commanding Officer of the 100th Battalion, 442nd Infantry, and currently Deputy Administrative Director of the Courts for the Hawaii Judiciary, was at Kalaeloa, formerly known as Barbers Point Naval Base, on December 30, 2005, when the first contingent of 136 personnel of the 100th Battalion, 442nd Infantry returned. He said, “they unloaded their equipment, secured their weapons and other gear, then formed up into a formation, and at midnight, to the accompaniment of the 25th Infantry (Light) Band, marched proudly into the hanger and to the cheers and shouts of over 200 people who had been waiting patiently since 10:00 PM. It was quite a sight.

“There were long rows of soldiers dressed in their desert camouflage uniforms with the subdued 100th Battalion shoulder patches on their right sleeves, indicating that they were combat soldiers. The 100th Battalion last wore its own patch during WW II. While soldiers and officers of the 100th served in the Korean War and in Vietnam, they were assigned to other units and wore other patches and insignias. How proud, and how young they looked, marching into the hanger. Once the formalities were done, and rather than dismissing the unit to allow everyone to go to their families and friends, the formation regrouped into a tighter formation, and led by one of their own, the soldiers and men began to sing. They sang the 100th Battalion and the 442nd Infantry songs with voices young and strong, filling the hanger.”

The 100th Battalion, 442nd Infantry operated in Sunni and Shiite farm villages around the 15 square mile of LSA Anaconda Airbase and their primary mission was to provide security and to prevent rocket and mortar attacks. The 100th Battalion confiscated more than 400 weapons, hundreds of artillery and mortar rounds and rockets, 206 rifles and pistols, 16 mortar tubes and blasting caps, explosives and mines, and more than 50 rocket-propelled grenade launchers. Four soldiers of the 100th were killed in action and 46 received the Purple Heart Medal for wounds sustain in combat. The 100th Battalion made the area secure for people to live normal lives. It also made it possible for the Iraqi people to vote for the ratification of the new constitution and later to vote in the December 15 Iraqi elections to choose 275 members of Parliament which will govern Iraq for the next four years.

The seven-men Police Transition Team of the 100th Battalion, composed of police officers in their civilian lives, provided a nine-month training program to the Iraqi police force of the town of Yethrib, located north of LSA Anaconda. Captain Yonemura’s press release late last year quoted Staff Sergeant Walter Kreitlow as saying “the training goal was to establish a better relationship between the community and police so the community isn’t afraid to go to the police to report crimes”. In civilian life, Kreitlow is a Florida law enforcement investigator. Yonemura also quoted Staff Sergeant William McCoy, an officer of the Honolulu Police Department: “Under Saddam Hussein, the police were more feared than respected. The public won’t approach the police if they don’t trust them”

The 29th Brigade Combat Team, with an ancillary goal of building strong relationships with the people, provided medical services to over 2,000 people in the villages; provided clothing, children shoes, blankets, purified water and food to the poor; and provided school supplies, wheel chairs, bicycles, sports equipment and medicine to the community. Many of these items were provided by the soldiers, their families and friends in the States – people to people. An Iraqi policeman, after passing out shoes to the children, said: “I am happy to see children smiling like this. Before I became a policeman I avoided the police. Under Saddam, bad things could happen if you got in their way. Now there is no problem but some of the people are still afraid. So something like this (giving shoes to children) will help people know they don’t have to be afraid.” In another incident, an element of the 29th Brigade Combat Team witnessed an Iraqi automobile accident. The 29th Brigade Combat Team called for a helicopter and the three injured Iraqis were airlifted to the Air Force hospital at LSA Anaconda for treatment.

The 34th “Red Bull” Division Association website notes that the “100th Battalion was allowed to wear the ‘Torch of Liberty’ 442nd Regimental Combat Team insignia during mobilization and deployment in Iraq. … All of our veterans know of the vital role played by the 100th Infantry Battalion as Red Bulls from Salerno to Rome. And we remember their transfer at Civitavecchia from the [34th’s] 133rd Infantry Regiment to the 442nd “Go For Broke” Infantry Regiment which became, for a while, the 4th regiment of our proud division”. Expressing his pride to being a member of the 100th Battalion, Tolani Teloso, civilian aide to the Secretary of the Army for American Samoa and a Korean War veteran is quoted by the Army News Service, August 16, 2004, as saying “to fill the shoes of those veterans takes some good soldiers”. An original 100th Battalion veteran, Ray Nosaka of Honolulu, reflected the views of his comrades when he said Ties between the [original] veterans and the younger soldiers remain tight”.

The Japanese American Veterans Association, (website: www.javadc.org) a veterans service organization which serves the interests of Asian-Pacific American veterans, offers its “Well Done” and “Welcome Back” to the members of the 100th Battalion, 442nd Infantry and the other members of the elite 29th Brigade Combat Team. According to the Department of Veterans Affairs, working with the 2000 census, there are 310,889 Asian-Pacific Islands American veterans. 30