The new Congressional Gold Medal design will debut in a presentation to three units on Nov. 2 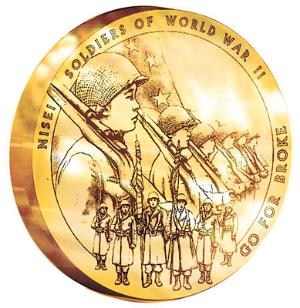 The design selected for a Congressional Gold Medal honoring World War II nisei soldiers features a line of six soldiers in formation -- inspired by a famous image taken near Bruyeres, France, in November 1944 -- on one side.

Four "Hawaii boys" are represented on a Congressional Gold Medal -- the nation's highest civilian honor given by Congress -- that recognizes the bravery and patriotism of nisei soldiers in the 100th Infantry Battalion, 442nd Regimental Combat Team and Military Intelligence Service during World War II, officials said.

The final design of the medal has been kept under wraps by the U.S. Mint, which wants to reveal the coin to the public when it is officially presented to the veterans groups Nov. 2 in Washington, D.C.

Veterans and officials who were involved in the selection process, however, said the medal will feature the image of six front-facing soldiers in formation, taken from a photo of 442nd soldiers on a wintry day in late 1944 in the Vosges mountains of northern France.

In the image, the Japanese-American soldiers are being thanked by Maj. Gen. John Dahlquist for their bravery in saving the Texas "Lost Battalion" of 211 soldiers while the 442nd suffered casualties of their own two to three times that number.

Five of an eventual seven total Presidential Unit Citations, five of 21 Medals of Honor and nine of the total 29 Distinguished Services Crosses awarded to 442nd soldiers were received for actions during the one-month period in the Vosges forests, during which time the unit suffered more than 800 wounded and killed.

The center four men in the color guard photo, which has been reproduced many times, enlarged and put on display in the Smithsonian Institution, are Matsuo Kaminishi, left, Edwin Kokubun, Henry Yamane and Kunito Sadaoka, officials said.

All four Hawaii men, who were part of the 442nd's anti-tank company, are now dead. Yamane was the last to die, in February at age 91.

The artist who came up with the design was told to be as generic as possible, but the representation was taken from the famous photo, officials said.

A version of the Gold Medal design previously recommended by the Commission of Fine Arts also features six soldiers viewed from the side in formation with M-1 Garand rifles resting on their shoulders and an American flag flying behind them. The reverse of the coin has unit logos.

There were "cosmetic" changes made in the final design, and recommendations included netting for camouflage on helmets and taking ribbons off uniforms that were not worn in a combat environment, officials said.

Christine Sato-Yamazaki, chairwoman of the National Veterans Network, the liaison to federal agencies for the Gold Medal, said the U.S. Mint plans to release the final design on Nov. 2 during the presentation in Washington.

"They pretty much told me it's not going to go public before that," Sato-Yamazaki said.

She did commend the Mint for "putting in a lot of research, time and also trying to understand the essence of the contributions of the units."

The Congressional Gold Medal award, signed into law by President Barack Obama on Oct. 5, 2010, states that on June 5, 1942, 1,431 predominantly nisei members of the Hawaii Provisional Infantry Battalion were sent from Hawaii to California, where the 100th Infantry Battalion was activated on June 12, 1942.

The 442nd Regimental Combat Team later trained with the 100th Battalion at Camp Shelby, Miss., in May 1943. A total of 2,686 442nd volunteers from Hawaii and 1,500 from internment camps assembled at Camp Shelby, the National Veterans Network said.

The Gold Medal law also notes that the Military Intelligence Service was made up of about 6,000 Japanese-American soldiers who conducted classified intelligence operations providing translation.

"The United States remains forever indebted to the bravery, valor and dedication to country these men faced while fighting a 2-fronted battle of discrimination at home and fascism abroad," the act said.

The Gold Medal design was reviewed by the Fine Arts Commission and Citizen Advisory Coinage Commission, and both recommended a design that was preferred by more than 90 veterans nationwide, the veterans network said.

An original, single Gold Medal will be presented to the three nisei units, and then the medal will be showcased in the Smithsonian. Over the years, other Congressional Gold Medals have been awarded to other individuals and units, including the Tuskegee Airmen, the Navajo Code Talkers and President Ronald Reagan and his wife.

Veterans with the three units attending the Washington, D.C., event will receive a free medal.

Retired Maj. Gen. Robert G.F. Lee, a former adjutant general for Hawaii and part of the state's Congressional Gold Medal committee, said only about 60 nisei veterans are traveling to Washington for the presentation.

The vast majority cannot make the trip because of their age, he said.

"Their hearts are willing, but they just can't make it physically," Lee said.

A presentation of replica Gold Medals will be made Dec. 17 during a luncheon at the Hawai'i Convention Center, and Lee expects 400 to 500 to attend. Lee said BAE Systems is paying for the medals for the veterans.